Champion of the Faith Alfonso de Spina was general of the Order of Franciscans, rector of the University of Salamanca, and confessor of King Henry IV. of Castile. In 1491 he was created a bishop under the reign of Innocent VIII.  Alfonso de Spina is one of the most despised individuals ever by the Jews (for methodically exposing their perfidy to overturn the State and the Church). 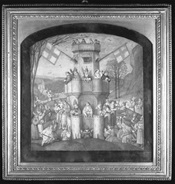 Spina’s renowned book entitled: "Fortalitium fidei contra Judeos, Saracenos et alios Christianae fidei inimicos" (The Fortress of faith, against the Jews, the Saracens and other enemies of the Christian faith) was written in 1459 A.D. It contains much moving military imagery/metaphors - the title, “Fortress of Faith" (to give comfort/security to believers and *defend the holy faith) indicates his objective.

*Spina says the warriors of the faith must be given, "accessible and convenient weapons" with which to conduct their battle. This is what he delivers in the Fortalitium.

Fortalitium Fidei is a treatise on various types of arguments (weapons) to be used by members of the Church Militant to confound the enemies of Our Holy Faith. It is divided into five books (which are likened to turrets): the first lauds the Faith and directs blows against those who specifically deny the Divinity of Christ; the second against heretics (mostly false converts from Judaism); the third against the Jews; the fourth, against Muslims; and the fifth gives instructions on the battle against the devil.

In his widely popular Fortalitium, Spina recommends the establishment of an (1.) Inquisition in Spain. He provides  details of the Deicides (2.) crimes: the poisoning of wells, desecration of the host, and their ritual murder of Catholic children - and suggests expelling the Jews from Spain, on the lines of the expulsion of them from England in (1290 A.D.) greatly helped that nation.

(1.)  He was especially successful in exposing the secret Jews (false converts). "I believe," said he, "that if a real Inquisition were introduced among us, countless numbers of them would be condemned to the stake; for countless numbers combine the adherence to Jewish customs with the observance of the Christian religion."

(2.) De Facto: all of which is supported by various historical sources, including the Inquisitional records.

In 2007 a Jewish scholar [professor of Jewish Renaissance and Medieval History and an expert on the history of medieval Italian Jewry] named Ariel Toaff, who ignited a storm of outcry (from the world ...) with the publication of his book (motive for $?), "Passovers of Blood, The Jews of Europe and Ritual Murders", which analyzed the trial records and transcripts from the ritual murder case of St. Simon of Trent, wrote:

"The Castillan Franciscan (Alfonso de Spina) recorded that in 1456 a Jewish notable named Maestro Salomone, originating from the territories of the Republic of Genoa and belonging to the illustrious family of physicians, had come to see him in the Minorite Convent at Valladolid, expressing the desire to be baptized. To convince Alfonso of the repugnance which Judaism now aroused in him, the Jew pointed precisely to the horrible custom of the ritual murders, of which he had heard speak or of which he had directly participated. According to him, he had learned from his parents that a famous Jewish physician from Padua, named Simon, had obtained a four-year-old child from an unscrupulous Christian mercenary soldier and had sacrificed him in his own dwelling, laying the child across a table and cruelly decapitating him. Maestro Salamone then reported that he had participated, with his father, in a secret rite, performed at Savonne, with the participation of numerous Jews in the city at that time, culminating in the crucifixion of a two-year old Christian child. The victim’s blood was poured into a vase, the same vase normally used to collect the blood during the circumcision of their own children. Subsequently, he personally, together with other participants in this horrendous rite, claimed to have consumed the blood as the ingredient in their traditional foods during the Jewish Passover. The body of the sacrificed child was said to have then been thrown into a filthy latrine."

Professor Toaff after reviewing multiple cases/evidence on blood ritual in Europe, wrote: "we find it difficult to dismiss detailed testimony confirmed by clear documentary fact", and concluded in his book that the practice of blood ritual by Jews against Catholic children, indeed has taken place throughout history. Threats were made against Toaff's life, and demands that he be prosecuted - as result of his stating the objective truth on the matter. Toaff promised not to give in to pressure and defend his work. Yet, on February 14, 2007, Toaff said in a statement that he ordered the Italian publisher of his book to freeze distribution of his book so that he could "re-edit" certain passages.

The Catholic Hero Spina was devoted to the absolute crushing of the Jewish Perfidy, practiced by, "Judios publicos," those who publicly and obstinately clung to the Hebrew Superstition, and "Judios ocultos," or secret Jews (i.e., Marranos: the most dangerous ... those who cunningly made pretend conversions to the Catholic Faith in order to destroy the Church from within, without being detected).

His sound conclusion ... the only way in which Spain can be converted into a truly Christian state, Spina states is by extirpating the Jewish heresy, expelling the Jews, and conquering the Muslims remaining on its soil.

"Unless the resolution of the Jewish question in Europe will have a different resolution from that of the apostolate of Enoch and of Elias, we think that there will be a time when we shall see Europe become, after centuries, a huge plantation, exploited by Jews, worked with the sweat of Christians reduced to slavery. There is then no remedy which we can adopt that is, on the one hand, too harsh, and on the other, not harsh enough." ("On the Jewish Question in Europe: The Causes, The Effects, The Remedies", from the Church Approved La Civilta Cattolica, vol. VII, no. XIV. 1890 A.D. [Oct, Nov, Dec])

"Who afflicts the Jews is doing the will of God, and who seeks their benefit will incur damnation. ... I ask on behalf of all Christians who read or hear this, to take it to heart, and resist the perverse race with all the more determination, and to despise the Jewish animals; and I wrote this especially for Christians who are in contact with Jews, so that they may be enlightened and come to the right insight, and when this happens - and even if only one among them all is moved by my writings, I have gained a brother."

-Johannes Pfefferkorn (Jewish convert to Catholicism), Assistant Prior of the Dominican Order at Cologne, from his work, Judenfeind ("Enemy of the Jews"), 1509 A.D.

"Fortalitium Fidei" by Alfonso de Spina (In the original Latin)

Why the Jews Hate the Holy Office of the Inquisition

Today is the Feast Day of the Catholic child martyr St. Simon of Trent, who was murdered by the hands of perfidious Jews in 1475 A.D. for their blood ritual. To learn more about this Saint (canonized by Pope Sixtus V) go to: http://stsimonoftrent.com.