The Unbroken Series of Successors of St. Peter 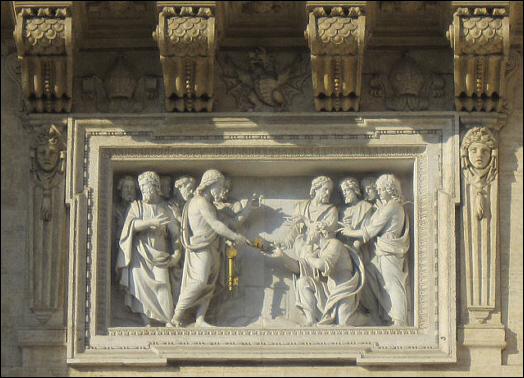 The relief above the main doorway of St. Peter's Basilica in Rome, depictingChrist giving the keys to the Kingdom of Heaven to the first Pope, St. Peter.

Thou art Peter; and upon this rock I will build my Church (St. Matt. xvi. 18). The Church of Jesus Christ, inasmuch as it is a society, a kingdom divinely established, should have a Head. Her invisible Head is Jesus Christ Himself; her visible Head is our Holy Father the Pope. Who is the Pope? The Pope is the successor of St. Peter, the Vicar of Jesus Christ and His representative on earth, the Pilot of the bark of St. Peter, the visible Head of the Church, and the common father of all the faithful. We say the Pope is the successor of St. Peter. By making the Apostle St. Peter the foundation-rock, the corner-stone, of His Church, Jesus Christ promised him successors until the end of time. For this immovable rock implies that Peter will be the perpetual Head of the Church, and will be ever necessary to sustain and govern her. But how will Peter always govern the Church, being mortal as the rest of men? How will he yet govern her after his death? By his successors, who will be the heirs of his power, of his privileges, and also of his apostolic spirit. Peter, as say the fathers, is ever living, and will always live, in the person of the successors whom Christ promised him in these words: Thou art Peter; and upon this rock I will build my Church, and the gates of hell shall not prevail against her. The promise of the Saviour has been fulfilled: Peter, having fixed his Pontifical See at Rome, has had as suc- cessors all the Roman Bishops or Pontiffs who have oc- cupied his See in the course of the ages down to our day. History unfolds to us this incomparable succession. It is a chain of gold held by the hand of Jesus Christ. Its first link is Peter, and we behold gloriously reigning the two hundred and fifty-ninth in the person of the august Leo XIII. After him the chain shall continue to lengthen until its final link is reached; that is to say, until the last Pope, who shall end his reign with the con- summation of the ages. This unbroken series of successors of St. Peter pre- sents us men who differed in name, in time, in character; but they all occupied the same See, and held in their hands the same keys, which were committed by Jesus Christ to the Apostle St. Peter. In other words, they taught the same doctrine, possessed the same power and privileges; insomuch that if the Prince of the Apostles were to return in person to exercise the Pontifical au- thority, his powers and privileges would not differ from those of the august Leo XIII., the actual possessor of His immortal heritage. The Popes may die; the Papacy neither dies nor changes. Let us thank God, my brethren, for having founded His Church on the indestructible rock of the Papacy, and let us always have the greatest reverence and love for our Holy Father the Pope, the successor of St. Peter.Source: "SHORT SERMONS FOR THE Low Masses of Sunday. COMPRISING IN FOUR SERIES A Methodical Exposition of Christian Doctrine", BY THE Rev. F. X. SCHOUPPE, S. J.Imprimatur 1884

Universal Testimony of The Fathers on Underground Church

St. Nicolas of Fluh on Triumph of Exiled Holy Father

"We declare, say, define and proclaim to every human creature that they by necessity for salvation are entirely subject to the Roman Pontiff."-Pope Boniface VIII, Unam Sanctam, Nov. 18, 1302, ex cathedra

Dogma of the Church: According to Christ's ordinance, Peter is to havesuccessors in his Primacy over the whole Church and for all time. (de fide)