A Very Good Haven in Brittany: Mary, Our Protectress 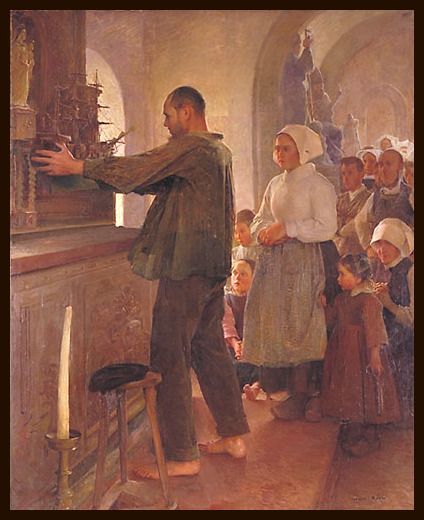 The practice of displaying model ships in Catholic churches stems from the Middle Ages. The Latin term

Ex-Voto means "made after a vow". There are many other types of Catholic Ex-Voto objects/offerings too.

In 1838 A.D., a crew of 48 Catholic seamen from Brittany, on a return voyage from Newfoundland, were besieged at sea by a violent tempest. Their vessel began to take in water, and they were certain it would capsize. In common, they decided to have recourse to Our Lady of Good Haven - promising to honor Her publicly at the Church under that title, in Paimpol [Brittany], if she saved them from the certain destruction. They had barely finished their prayer, when the weather became calmer and the waves began to subside. The mariners were able to repair their sails, and catch a favorable wind, which brought them home to the coasts of Brittany.

Once ashore, they recited the Litany of Loreto, and walked barefooted and bare-headed along the banks and through the streets, to the Church of Our Lady of Good Haven in Paimpol (which contained a much venerated image of Notre-Dame de Bon Port). The towns people marvelled at the sight and followed them as they walked - giving thanks to the Powerful Mother who had saved them. When the crew arrived at the Church, the fervent mariners, with the most heartfelt sentiment, chanted the hymn, “Ave Maris Stella” in which they were joined in gratitude by the people.

Surviving The 3 Days of Darkness in the Land of St. Anne (Brittany)

*Note: An Ex-Voto ship, is a ship model displayed in a Catholic church - often constructed and given as gifts to a church by seamen and ship builders. The practice of displaying model ships in Catholic churches stems from the Middle Ages. The Latin term Ex-Voto means "made after a vow". There are many other types of Catholic Ex-voto objects/offerings too.

The Miraculous Voyage of St. Raymond of Penyafort