Image: Shackles used to capture people to be sold into slavery in Africa in the 18th century. African tribal leaders have been ordered

to apologise for the role of their ancestors in the transatlantic trade.

people to slavers and should say sorry like US and Britain

Traditional African rulers whose ancestors collaborated with European and Arab slave traders should follow Britain and the United States by publicly saying sorry, according to human rights organisations.

The Civil Rights Congress of Nigeria has written to tribal chiefs saying: "We cannot continue to blame the white men, as Africans, particularly the traditional rulers, are not blameless."

The appeal has reopened a sensitive debate over the part some chiefs played in helping to capture their fellow Africans and sell them into bondage as part of the transatlantic slave trade.

The President of Uganda

"African chiefs were the ones waging war on each other and capturing their own people and selling them. If anyone should apologise it should be the African chiefs. We still have those traitors here even today."

*Note: Pres. Museveni was involved in rebellions that toppled the infamous Ugandan tyrant Idi Amin in the 1970's. -TCW

The congress argued that the ancestors of the chiefs had helped to raid and kidnap defenceless communities and traded them to Europeans. They should now apologise to "put a final seal to the history of slave trade", it said.

"In view of the fact that the Americans and Europe have accepted the cruelty of their roles and have forcefully apologised, it would be logical, reasonable and humbling if African traditional rulers ... [can] accept blame and formally apologise to the descendants of the victims of their collaborative and exploitative slave trade."

Estimates vary that between 10 million and 28 million Africans were sent to the Americas and sold into slavery between 1450 and the early 19th century.

More than a million are believed to have died in transit across the so-called "middle passage" of the Atlantic due to inhumane conditions aboard slave ships and the brutal crushing of any resistance.

Three years ago Tony Blair described Britain's participation as a "crime against humanity" and expressed his "deep sorrow". The US Senate voted for an apology this year.

Shehu Sani, head of the congress, said it was calling for traditional rulers to apologise now because they were seeking inclusion in a forthcoming constitutional amendment in Nigeria. 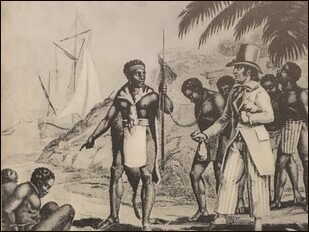 Many Africans accumulated enormous wealth and power as a result of the trade of their fellow Africans. Not only was slavery an established institution in West Africa before European tradersarrived, but Africans were also involved in a trans-Saharan trade in slaves along these routes. When France and Britain outlawed slavery in their territories in the early 19th c., African chiefs who had grown rich and powerful off the slave trade, sent protest delegations to Paris and London.

"We felt that for them to have the moral standing to be part of our constitutional arrangement there are some historical issues for them to address," he told the BBC World Service. "One part of which is the involvement of their institutions in the slave trade."

He said that on behalf of the buyers of slaves, the ancestors of the traditional rulers "raided communities and kidnapped people, shipping them away across the Sahara or across the Atlantic".

Many slaves captured inland in Africa died on the long journey to the coast.

The position was endorsed by Henry Bonsu, a British-born broadcaster of Ghanaian descent who examined the issue in Ghana for a radio documentary. He said some chiefs had accepted responsibility and sought atonement by visiting Liverpool and the United States.

"I interviewed a chief who acknowledged there was collaboration and that without that involvement we wouldn't have seen human trafficking on an industrial scale," said Bonsu, the co-founder of digital station Colourful Radio.

"An apology in Nigeria might be helpful because the chiefs did some terrible things and abetted a major crime."

What is largely missing from the historical recorded on the transatlantic slave trade, is thehistory of blood and the brutality visited on weaker African tribes by stronger, slave catcher tribes.For two hundred years the area of Dahomey [now the country of Benin], among others [regions], wereinstrumental in providing enslaved Africans to the English, Spanish, Portuguese, Dutch and Americans.

The non-government organisation Africa Human Right Heritage, based in Accra, Ghana, supports the campaign for an apology. Baffour Anning, its chief executive, said: "I certainly agree with the Nigeria Civil Rights Congress that the traditional leaders should render an apology for their role in the inhuman slavery administration." [...]

But the issue was not a high priority for most African citizens, according to Bonsu. "In my experience it's mainly the African diaspora who want an apology. People aren't milling around Lagos or Accra moaning about why chiefs don't apologise. They are more concerned about the everyday and why they still have bad governance."

Fred Swaniker, the founder of the African Leadership Academy, said: "I'm not sure whether an apology is needed, but it would be worth looking at and acknowledging the role Africa did play in the slave trade. Someone had to find the slaves and bring them before the Europeans."

The shameful history of some traditional leaders remains an awkward subject on which many politicians prefer to maintain silence. One exception was in 1998 when Yoweri Museveni, the president of Uganda, told an audience including Bill Clinton: "African chiefs were the ones waging war on each other and capturing their own people and selling them. If anyone should apologise it should be the African chiefs. We still have those traitors here even today." (End of The Guardian's 11/18/2009 article.)

Slave Trade in the 20th Century by Africans 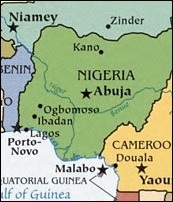 The British government knew the slave trade, by African Chiefs, continued in theirEnglish colony of Nigeria into the 1950s, (British) archival documents have revealed

"Acclaimed Igbo historian Adiele Afigbo described the slave trade in south-eastern Nigeria which lasted until the late 1940s and early 1950s as one of the best kept secrets of the British colonial administration.

While the international trade ended, the local trade continued.

'The government was aware of the fact that the coastal chiefs and the major coastal traders had continued to buy slaves from the interior,' wrote Afigbo.

He added that the British tolerated the ongoing trade on political and economic grounds.

They needed the slave-trading chiefs for effective local governance, and for the expansion and growth of legitimate trade."

Slave Trade in the 21st Century by Africans

Slaves in Mauritania (Africa) performing hard labor for no pay

The African country of Mauritania was the last country in the world to abolish slavery. That happened in 1981, nearly 120 years after the Emancipation Proclamation was issued in the United States of America. It wasn’t until 2007, that Mauritania passed a law that criminalized the act of owning another person. Although the practice of slavery was "officially" banned, it is still rampant in many parts of the country. Slave masters in Mauritania exercise full ownership over their slaves. 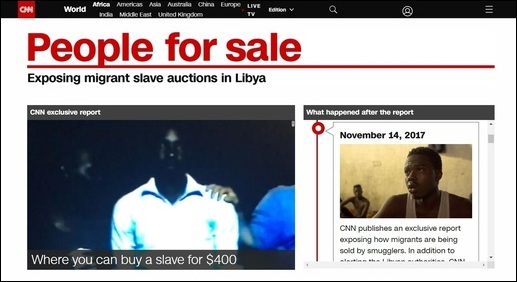 In Libya, African slave traders are selling Africans as property

The crew is also told of auctions taking place at 9 locations in the country. (Slave auctions are still occuring in Libya. -ED)

obtained by **CNN, of African slave traders selling their fellow Africans, in 2017.

*Caution: video is disturbing - contains some graphic language - not suitable for certain audiences.

**(Note: Opinions, interpretations, conclusions, and recommendations are those of the authors (at CNN) and are not necessarily endorsed by TCW. -ED)

Papal Condemnation of the Slave Trade

"...walking in the footsteps of Our Predecessors, We warn... that no one in the future dare to vex anyone, despoil him of his possessions, reduce to servitude, or lend aid and favour to those who give themselves up to these practices, or exercise that inhuman trafficby which the Blacks, as if they were not men but rather animals, having been brought into servitude, in no matter what way, are, without any distinction, in contempt of the rights of justice and humanity, bought, sold, and devoted sometimes to the hardest labour. ... "

Dear Reader, the link to donate online (above in red font), securely directs to TCW's Paypal account.Also, for your convenience we have posted this QR Code, that can be used to give, via mobile devices.

Why doesn't conservative media present these incontrovertible historical facts on the African chief's centuries long, essential role, in the buying & selling of their fellow African people "like cattle" to the highest bidder?