"A 16-year-old reputed gangbanger who allegedly shot an NYPD cop in the Bronx is back in custody Thursday on a probation violation — just one week after posting bail.

Camrin Williams, an up-and-coming rapper ... was ordered back to the Crossroads Juvenile Center in Brooklyn because the gun he allegedly used to shoot the cop violated the terms of his probation from an earlier case, sources said.

Williams was on probation in a 2020 gun case when he allegedly got into a scuffle with police officers in Belmont on Jan. 18 and shot the 27 year-old cop. 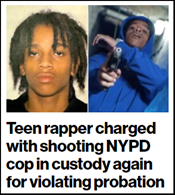 The teen was hit with assault and weapons charges in that case, with Bronx prosecutors asking that the troubled teen be held without bail pending his next court date.

But Acting Bronx Supreme Court Justice Denis Boyle set his bond at $250,000, which Williams posted on Jan. 27 — reportedly with an advance he received after signing a recording contract with Interscope Records.

However, the teen was picked up again Thursday and hauled into a Family Court hearing, during which he was ordered back to the juvenile facility, sources said.

It is unclear why he wasn’t hit with the probation violation when he was in custody following his arrest in the police shooting. [...]

Williams’ attorney, Dawn Florio, did not immediately respond to a request for comment."

Commie "Mayor" of Mpls on Looting & Arson in the City

Video: Police Come Under Attack by Criminal with AK-47