"It is unimaginable what can happen in a conclave."

Image of Cardinal Siri of Genoa having an Audience with Pope Pius XII (c. 1955)

"When Pius XII died I was the *only candidate for his succession. It was he who designated me, Pope Pacelli. ... It is unimaginable what can happen in a conclave."

*"After the death of Pius XII cardinal Cicognani, who was secretary, sent me to Siri to offer him the candidacy. Cicognani thought that Siri was the only one who was able to continue Pacelli’s [Pius XII's] magisterium.” -Fr. José Sebastian Laboa (Interview 10/10/1989)

Note: It has been reported that Pope Pius XII had wanted Cardinal Siri of Genoa, to reign as the next pope after his death - without the convening of a Conclave [although rare, something a pope can do, i.e., choose his own successor]. But, Siri, greatly humbled, proposed it best to proceed with a Papal Conclave. 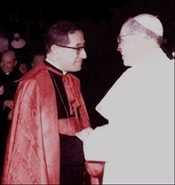 “It was February 1988. Two 30 Days (Magazine) reporters were on their way to the North Italian port city of Genoa to interview the Cardinal Archbishop Giuseppe Siri. [...] Siri was asked a question he did not expect, about the truth of periodic allegations that Masonry had infiltrated the Church. The elderly Cardinal did not answer and, suggesting that he did not want to make any public declaration on the issue, he pointed to the tape recorder that was switched on. Then he made a gesture with his other hand that was very eloquent. What he meant was: ‘Of course, there was infiltration.’ The tape recorder was turned off and Siri added: 'This is a very serious matter, and I have first-hand sources. I have written my record of this and other events in the life of the Church, which will be published in 50 years’ time. But for now, I would prefer not to say anything more.'" (Extracted from: 30 Days Magazine, "Infiltrators? Yes... ”, November, 1991, p. 55)

"Violent hands will be laid on the Supreme Head of the Catholic Church. ... Yes

yes, the flock will become small. Many of you will see those sad times and days which will bring such evil in their train... ." (End Times Prophecy of Bp. Wittman) 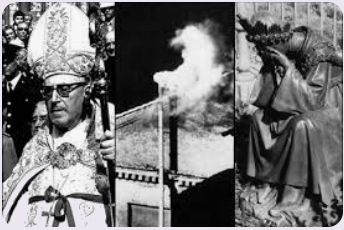 L/R: (1.) As a Cardinal, Giuseppe Siri of Genoa, Italy was known to be the handpicked successor of Pius XII. (2.) Papal Conclave on Oct 26, 1958 at 6:00 p.m., white smoke bellows forth from the Sistine Chapel for five minutes, indicating Siri is elected Pope. He *accepted the office and chose the name Gregory XVII. Then, a freemasonic coup d'etat occurred within the conclave itself - violently "blocking" the newly elected pope. (3.) The ominous reality of Our Lady of La Salette's words that: "Rome will lose the faith and become the seat of the Antichrist... The Church will be in eclipse...," is now sadly right before our very eyes.

obtained the necessary votes and was elected Pope Gregory XVII".

Important Note: The 1917 Code (Canon 1814) states that civil documents are to be presumed genuine unless the contrary is proven by evident arguments.

After the 1958 coup, "Siri" Favored Abolishing the Secret of the Conclave

"As to the Conclaves of the future, Siri used to say one should pray in order to obtain the grace that the prospective participants be truly free from any partisan influence and influx, not only of an ethical and political nature, but even social. And that no sect lay its hand onto these! [Conclaves] concluded he. He was referring to Freemasonry, which he claimed have knowledge, through direct confidences, received by affiliates, and knowing the schemes through which Freemasonry attempted to tighten its grip on men and organs of the Vatican, (He did not hesitate to name a few), and with the danger that threatened to extend its grip onto the Conclave. Perhaps it was also on the account of that, that he proposed the abolition of the secret: that all will take place in broad daylight!"

TCW Statement on Current Situation/Crisis of The Church

"There is one God, and one Christ, and but one episcopal chair, originally founded on Peter, by our Lord's authority. There cannot, therefore, be erected another altar, or another priesthood. Whatever any man in his rage or rashness shall appoint, in defiance of the divine institution,

must be a spurious, profane, and sacrilegious ordinance." St. Cyprian, Church Father (d. 258)

DestroyFreemasonry.com: (This is the final battle, Roman Catholicism vs. Judeo-Masonry.

Read the Traditional Pontifical statements condemning the evil sect of Freemasonry, as outlined

"Here is my fiery sword... for the fight" -St. Michael

Prophecy of St. Nicolas of Fluh (15th c.): "The Church will be PUNISHED because the majority of her members, high and low, will become so perverted. The Church will sink deeper and deeper until she will at last seem to be extinguished, and the SUCCESSION OF PETER and the other Apostles to have expired. But, after this, SHE WILL BE VICTORIOUSLY EXALTED in the sight of ALL doubters."

I didn't know that Pope Pius XII wanted Siri to be his successor, without the convening of a conclave. it's like he had a premonition of what would happen.