A Gift from Heaven: Learn about Notre-Dame de Boulogne

“I choose your city as a place of grace.” 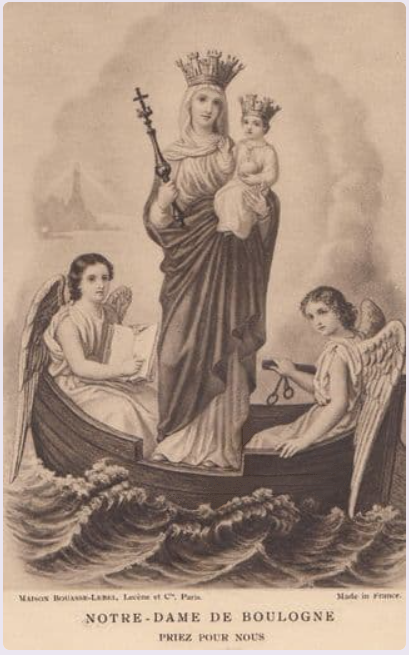 Commandeered by Angels, the Miraculous Statue of Our Lady Arrives in Boulogne!

In 633 A.D., in the city of Boulogne-sur-mer, part of the Kingdom of France, some villagers at the seashore witnessed a mysterious boat or ship, come into the *harbor of Boulogne. It finally came to rest in the estuary of the Liane River, seemingly of its own accord. At first glance no one was seen and on climbing aboard, a man confirmed that the vessel was empty of people and without rudder, oars or sails. The ship, however, bore a luminous statue of the Virgin and Child. On bringing the statue on land a voice was heard saying, “I choose your city as a place of grace.”

*At the same time the vessel came into the harbor of Boulogne, the Holy Virgin appeared to several faithful in a chapel on the heights of the city, announcing the arrival of the boat in the port and asking them to install the statue in the chapel, so that it could be honored. They gratefully complied with Her request. 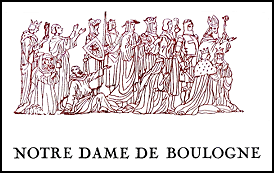 Boulogne-sur-mer became one of the most important pilgrimage sites in Catholic Europe;

fourteen kings of France, five kings of England and many Saints came there on pilgrimage.

Miraculous prodigies soon followed and pilgrims from all over Christendom, which included many Kings and Saints, would travel to venerate Our Lady at Boulogne-sur-mer, where eventually a renowned Cathedral (which was most tragically sacked by French revolutionaries) and then a beautiful Basilica was later to be built, from the generous alms of the pious patrons of *Notre-Dame de Boulogne.

*Note: TCW will be adding additional posts in this sub-section, of the very important place/role Our Lady of Boulogne (also known under the titles of: Our Lady Star of the Sea and Our Lady of the Grand Return) has had in the History of the Catholic Church, and the Eldest Daughter of the Church [France].  TCW also wants to impress on its readers, the imperative need today, of invoking the miraculous intercession of Notre-Dame de Boulogne, to end this, the worst persecution ever, of the True Papacy (which is now underground). -ED

Illustration of Louis XI in 1479 Presenting Shrine of O.L. of Boulogne with a Solid Golden Heart

How Nice! I was there in May 2008. Boulogne-sur-Mer is a very impressive town. I even took a photo of the entrance gate with Mary in the center. I will send.

Yes, M.C., please send any photos/info you have (preferably in English...) on Notre Dame de Boulogne. Merry Christmas to you and all True Catholics "across the pond"!