Godfrey Credits His Crusade Victory to O.L. of Boulogne 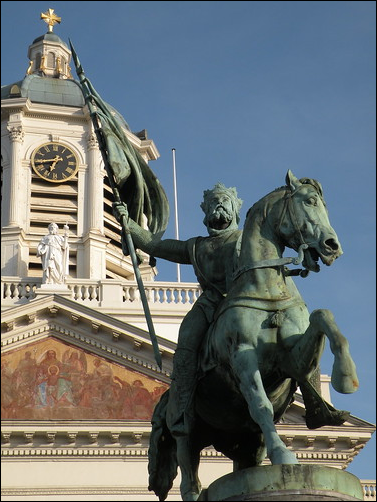 located at The Place Royale in Brussels - directly in front of the Saint-Jacques-sur-Coudenberg Church.

Godfrey, a French nobleman, was born in the city graced by Our Lady [Boulogne-sur-mer], to St. Ida. He promptly followed Pope Urban II’s urgent call for a Crusade to reclaim the Holy Land from the invader infidel Mohammedans. Before heading for the First Crusade, Godfrey prayed in the city of his birth, before Notre-Dame de Boulogne, asking for her powerful intercession/protection during the forthcoming crusading campaign battle(s).

Following his military success of the capturing of Jerusalem, occurring on July 15, 1099, Godfrey, the Duke and Advocate of the Holy Sepulchre [note: in deep humility, he refused to be called the King of Jerusalem, in deference to Our Blessed Lord], attributed his victory and symbolically offered the Crown of Jerusalem to ‘Our Lady of Molanus’ and ‘Our Lady of the Sea at Boulogne’.

"A Gift from Heaven: Learn about Notre-Dame de Boulogne"

See TCW's latest post, "Godfrey of Bouillon Credits His Crusade Victory to Our Lady of Boulogne" in our new section/series titled: (The Miraculous Powers of Notre Dame de Boulogne) -ED