"There is a secret about the life of the Sovereign

Marie-Julie Jahenny had revelations from many Saints/Holy individuals. Pius IX appeared to "The Breton Stigmatist" and shed some insight as to why, a future Successor of His - Pope Gregory XVII (who was abandoned by his own) - was most cautious publicly, regarding His papacy.

On May 18th, 1985 upon hearing the persistent rumors of Cardinal Siri being elected pope from good sources: the well-known French Journalist Luis-Hubert Remy (through the critical go-between of his friend Monsieur de la Franquerie) - and François Dallaism -in order to, as Monsieur Remy wrote: "relieve our consciences", obtained a meeting with "Cardinal Siri" at the episcopal palace in Genoa. After a very enjoyable conversation amongst the four of them, the question was presented to the elder prelate- if he was elected pope: 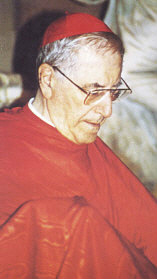 "Some moments later, when we asked him wheth­er he had been elected pope, his reaction was com­pletely different. He started by remaining silent for a long time, then raised his eyes to heaven with a ric­tus of suffering and pain, joined his hands and said, weighing each word with gravity: “I am bound by the secret.” Then, after a long silence, heavy for us all, he said again: “I am bound by the secret. *This secret is horrible. I would have books to write about the different conclaves. Very serious things have taken place. But I can say nothing.” (Excerpt from, "The Pope: Could He Be Cardinal Siri?" by Louis Remy, Bulletin SOUS LA BANNIERE)

*"This secret (the masonic mutiny [usurpation] at the 1958 Conclave) is horrible" ... "But I can say nothing." ... as he was constantly monitored and under the gravest threats:

"My successor, says Pius IX, will see the blood of christians running

with an increased violence. He will see it running like streams. I hope

Frenchmen will have, in his behalf, the same devotion they had for me...

zealous king will give France all its delights. She has to go through

that great battle... which is swinging above France and above Rome.

That storm will bring back triumphantly a predestined King whom men

refuse but whom Heaven loves.

prince who will come to his assistance. He took a vow about it and

promised it to Heaven "Yes, I will go and shed my blood to save his life."

He will go but will be spared: his protection is written in Heaven".

"Children of Calvary, I am not dead but just asleep (mystical). My slumber is

light; I will arise at the clatter of the storm and will bring victory

along... I love Frenchmen; I love France; she has been my support and

defence... You who are still living, perhaps do not suspect the (1.) plots

which are laid, at this moment, against the Church.

(1.) "... the impious sect [Freemasonry] boasts as one of its principal works the religious persecution which ... is inspired and promoted by masonry, in an immediate or mediate, direct or indirect manner, by flattery or threats, seduction or revolution." (Pope Leo XIII, Custodi Di Quella Fede [On Freemasonry in Italy], December 8, 1892)

"Do not be afraid, but within a short time you will see that storm

arising over France and over Rome. Within a few hours, France will give

her assistance to the captive...

I carried on. Arms recently invented will be taken up; (1.) day and night

they will encamp around his prison. They will shower a hailstorm of

bullets. Fire and blood will have their voices heard, taking turns.

The victim will be locked within the Vatican; he will receive a great

assistance from Heaven. There is a secret about the life of the

(1.) It is an important observation that the episcopal palace in Genoa, Italy (where Gregory XVII was exiled) had elaborate video surveillance cameras surrounding its perimeter- seemingly years before this type of technology was in common usage by the public sector [i.e banks, government institutions, etc.]. The Holy mystic Marie-Julie Jahenny (who related many aspects of the hostage pope's hidden papacy) had it revealed to her the means by which the Enemy would achieve its stealthy incarceration (sede impediti) of Christ's Vicar: "Arms recently invented will be taken up; day and night they will encamp around his prison." (March 13, 1878) And on August 10, 1880: "If the prisoner martyr (Pope) directs a call (for help), it will be forbidden, under pain of torture and death, for any kingdom to rush in response to his call."

(2.) This secret, of the Divine Providence - has been revealed for us unworthy souls now ... how many listen/act? -ED

(Marie-Julie) --I do not want anything to do with it, kind Holy Father.

"However that secret is directed to you".

"Keep these words well in mind, my children. Later on, it will be given

you to study them in their full extension...

Divine Jesus has a great design upon this land of Brittany; but

sufferings have to be proportioned to that design".

"It is granted to few to recognize the true Church amid the darkness of so many schisms and heresies, and to fewer still so to love the truth which they have seen as to fly to its embrace."
(St. Robert Bellarmine, Doctor of the Church)

Where it is Petrus ?

In exile. Praying and making sacrifices for His flock.

" ...only a few priests will be left, who will obey the luminous voice which is in command of all men on earth, as the Chief of the most Holy Church." (Our Lady to Marie Julie Jahenny Oct 27, 1884, "Prophecies Of La Fraudais", p. 146)