The following Church Approved book (*below), from 1948, provides the Theological reasoning on why, in this current grave situation for the (small) True Flock of Catholics, that, those who are seeking to get married, and cannot in practicality find a fellow True Catholic, may lawfully seek a responsible (non-Catholic) spouse and marry them, without incurring penalty from the Church [they would have a valid Catholic marriage].

("A companion article to this post is TCW's, In Extreme Situation(s) Priest Not Required for Marriage, 01/18/2021. If you have questions and/or would like more information on the process of getting validly married in the True Catholic Church, click here. All inquires will be held in the strictest of confidence." -ED) 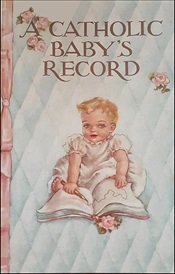 Note: Below are excerpts from the extremely important/scholarly book, *"The History, Nature, and Use of Epikeia in Moral Theology", by Fr. Lawrence Joseph Riley, Imp. 1948:

"... suppose that in our day a Catholic is forced down from an airplane, or shipwrecked on some far-distant and inaccessible island. After some time he desires to contract marriage with one of the natives. However, it is impossible to communicate with the outside world, and thus to obtain a dispensation from the impediment of disparity of cult [permission from a bishop to marry a non-Catholic]. There is no indication that the infidel wishes to become baptized, or that the Catholic will within any reasonable time be enabled either to leave the island or to establish communication with ecclesiastical authorities in order to seek the necessary dispensation. Does the ecclesiastical impediment prevent him perpetually from exercising his natural right to marry? Must he remain in a constant, proximate and necessary occasion of sin, thus endangering his eternal salvation? In such cases it would most certainly seem to be beyond the power of any human legislator to insist upon the binding force of a human law, since such insistence would be equivalent to the confiscation of a natural right, and would probably result in an individual’s being forced to remain in circumstances which render precarious his soul’s salvation." (Page 417)

"But confiscation of a right is entirely different from postponing the exercise of that right. To confiscate the right to marry would be, as Valton and Payen point out, equivalent to forcing individuals against their will to a life of celibacy. No human legislator has that power. Nor has the Church ever claimed that power, much as it has exalted a life of celibacy. This teaching is clearly set forth by Pope Leo XIII, and incorporated into the encyclical *Casti connubii of Pope Pius XI. 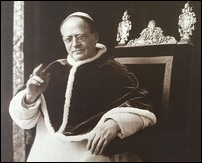 *In choosing a state of life, it is indisputable that all are at full liberty either to follow the counsel of Jesus Christ as to virginity, or to enter into the bonds of marriage. No human law can abolish the natural and primitive right of marriage... (Pope Pius XI)

"In discussing the deferring of a marriage, theologians frequently speak of quasi perpetual postponement or postponement for a very long time, as exceeding the legislator’s power to demand." (Pages 419-420)

"To conclude the discussion of this point, it may be stated that, although the Church most certainly has the power to establish diriment impediments and to restrict thereby a Christian’s right to marry, it has no power to suppress that right entirely. If an ecclesiastical law, otherwise just and commendable, would by reason of circumstances thus confiscate the natural right to marry, then insofar as that particular situation is concerned, the ecclesiastical law ceases to bind, precisely because the Church’s power to urge the obligation of the law in those circumstances is no longer existent.

* . . . positive human law, while it may for the common good establish regulations for the use of a right, has no authority to suppress the right itself which is given by nature. Now nature, in bestowing upon human beings the power of generation, allows the normal use of that power. In other words, the office of a human lawgiver is to adapt the order of nature to varying circumstances and to supplement its general decrees by more definite provisions; but he cannot subvert or contradict that order . . . 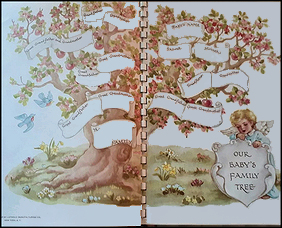 "Violent hands will be laid on the Supreme Head of the Catholic Church. ... Yes,yes, the flock will become small." (End Times Prophecy of Bp. Wittman, d. 1833) 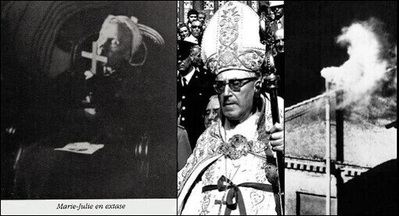 L/R: (1.) Catholic prophetess Marie-Julie Jahenny photographed in a state of spiritual ecstasy. (2.) As a Cardinal, Giuseppe Siri of Genoa, Italy was known to be the handpicked successor of Pius XII. (3.) Papal Conclave on Oct 26, 1958 at 6:00 p.m., white smoke bellows forth from the Sistine Chapel for five minutes, indicating Siri is elected Pope. He *accepted the office and chose the name Gregory XVII. Then, a freemasonic coup d'etat occurred within the conclave itself - violently "blocking" the newly elected pope. [*Note: "The person thus elected [pope] acquires full jurisdiction over the universal Church immediately on consenting, and becomes the Vicar of Christ on earth."  ("Canonical Elections" p. 107, Imprimatur 1917)] 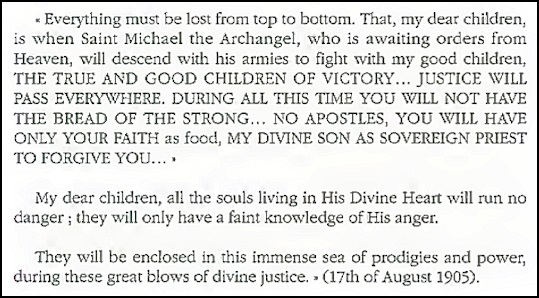 *Extracted from the book: "Marie-Julie Jahenny, The Breton Stigmatist", p. 43

Full Text of: "The History, Nature, and Use of Epikeia in Moral Theology",

The Church's Teaching on Courtship & Company-Keeping

These Requirements are Needed for a Valid Marriage

In Extreme Situation(s) Priest Not Required for Marriage

A Wife is to Submit to Her Husband in Everything

"How to Baptize in Cases of Emergency?" Letter to The Editor

Simple Guide On How To Pray The Family Rosary

Maybe I'm confusing two separate points. Doesn't the Church allow a lawful marriage seperation in certain situations? Note: the couple were not, and are not true Catholics, currently. Thanks again for the information.

Two may separate, but the sacramental bond of marriage remains until death of one of the partners. There is a sacrament when two are baptised and married

In very grave circumstances, separations are not unlawful, according to the Church.

Hi. Is there any Church teaching regarding second marriages available? Thanks.

"Persons may receive the sacrament of Matrimony more than once, provided they are certain of the death of the former husband or wife and comply with the laws of the Church." (Baltimore Catechism #3 Twenty-Sixth Lesson)