"The Church will know of suffering before it is entirely closed. It will undergo the direst outrages, not to mention those of a large number of its children who will deny it, by reason of their attachment to promises on the part of men who will break their own word; that will break anything that can be found of the most sacred; who will treat the Son of God with the most abonimable words. The number of those souls, forever seperated from God, so to speak, will rise beyond the three quarters.". (Heavenly revelaton to Marie-Julie Jahenny, June 29, 1882 - "Prophecies Of La Fraudais of Marie-Julie Jahenny" pp. 210-213)

One of the basics of Communist deception is its use of (condemned by the Church) Hegelian dialectics, i.e, the diabolical:

The word "dialectic" according to the American Heritage® Dictionary, 4th edition is defined as: 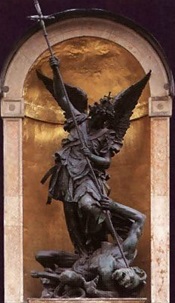 2. a. The process especially associated with Hegel of arriving at the truth by stating a thesis, developing a contradictory antithesis, and combining and resolving them into a coherent synthesis.

b. Hegel's critical method for the investigation of this process.

3. a. The Marxian process of change through the conflict of opposing forces, whereby a given contradiction is characterized by a primary and a secondary aspect, the secondary succumbing to the primary, which is then transformed into an aspect of a new contradiction. Often used in the plural with a singular or plural verb.

b. The Marxian critique of this process.

4. dialectics (used with a sing. verb) A method of argument or exposition that systematically weighs contradictory facts or ideas with a view to the resolution of their real or apparent contradictions.

From our research, Mr. Lefebvre was never mentioned as being not in full-capacity of his faculties or absent-minded/forgetful. What follows is just one sampling of this sectarian's well-known dialectics against de fide.

Note: In TCW's 04/19/13 post we showed why Mr. Marcel Lefebvre according to true Catholic Tradition (Thomism) was never a priest or bishop. Any reference(s) below to layman Lefebvre as a "priest" or "bishop", are erroneous/false (although they were likely made in good faith), yet are part of the documentation of his statements. -ED

Nov. 16, 1976Firstly: Lefebvre agreed with the propositions that

On one day Mgr. Lefebvre treats the conciliar church, its hierarchy and particularly its "pope" as schismatic: "All those who cooperate in the application of this upheaval, accept and adhere to this new conciliar church ... enter into schism." Le Figaro, Aug. 4, 1976. (ECÔNE FULL STOP, Fortes in Fide, by Fr Noél Barbara)

On another day, he lowers himself to beg from these (who he calls) "schismatics" a recognition for which he is still waiting: "Most Holy Father, for the honour of Jesus Christ, for the good of the Church, for the salvation of souls, we beseech you to say a single word, a single word: 'Let them continue'." Letter to John Paul II, 24 December 1978.

Lefebvre stated that his own views had not changed over the years; that no one should be mistaken regarding his and the official position of the SSPX on the Novus Ordo Missae - which was: that no one in the SSPX could "tolerate among its members those who refuse to pray for the Pope or affirm that the Novus Ordo Missae is per se invalid..." "Catholic", July & Nov 83, p.3.

Fr. Noél Barbara: "He (Lefebvre) often says, in defence of his work, that the saints did not act differently."Whatever the prelate may say, the wild seminaries, the ordinations without dimissorial letters, confirmations and confessions without jurisdiction are practices contrary to what has always been done in the Church. "With the exception of the heretical-schismatics who do not recognize the Catholic Church as the sole ark of salvation and do not belong to her, no bishop or saint whatever has ever opened a seminary, a university, a place of worship, even a private one, or administered the sacraments without the previous permission of the Ordinary, still less in defying his prohibition, without having first denounced him as a heretic and acting publicly in consequence, as did St. Athanasius in his day." (ECÔNE FULL STOP)

"Whoever wishes to be saved must, above all, keep the Catholic faith. For unless a person keeps this faith whole and entire, he will undoubtedly be lost forever." (Athanasian Creed)

Long-time Traditionalist, and publisher of the Catholic journal "The Spark", Christopher Shannon, (who was in Econe-Sion, Switzerland in the early 1970's but left after realizing the SSPX HQ's and Lefebvre were permeated with Freemasonry) wrote on January 29th, 1997:

"And this. Follow the money trail. I suspect the bulk of the funds are from Rome. Lefebvre made frequent trips to Rome while I was with him (I sat next to him at the dinner table). All of these were cordial, not combative, or argumentative, as most would believe. He was simply arranging strategies under the leadership of his Roman bosses. How do I know this, too? He told me.The man's a devil, benign saintly smile. The sugar, the poison, was instilled in the process and grows, and grows, until the harvest."

"The veil covering the greatest deceit ever to have mystified the clergy and baffled the faithful, is doubtless beginning to be torn asunder. 'Archbishop' Marcel Lefebvre." -Piers Compton, TBC,

The Hidden Hand In the Vatican...  read more by clicking here.

His Holiness, Pope Pius IX, Quartus Supra, January 6, 1873: “4. It has always been the custom of heretics and schismatics to call themselves Catholics and to proclaim their many excellences in order to lead peoples and princes into error.”