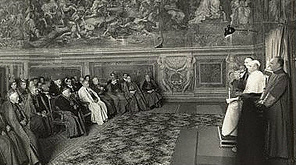 With excellent intelligence information - just prior to the ordered attack on Monte Cassino, by the the highest AngloAmerican (Judeo-Masonic) military command - when it appeared that Rome itself might be bombed into non-existence, Pope Pius XII summoned all the cardinals then in Rome to the Vatican, and assembled them on Feb. 9, 1944. He announced to the cardinals that he would remain in Rome regardless of what happened -but told them: *"We release you from any obligation to follow our fate. Each one of you is free to do what you think best." He then instructed them that, if anything happened to him, if he were IMPRISONED OR KILLED, they must gather together wherever they could and elect a new Pope. At that point in time it seemed quite possible that Rome might become uninhabitable for an undetermined length of time, and the war might go on indefinitely. *"Crown of Glory: The Life of Pope Pius XII", Alden Hatch and Shamus Walshe, 1957, pg. 174