Before & After Photos of Monte Cassino Abbey Attack 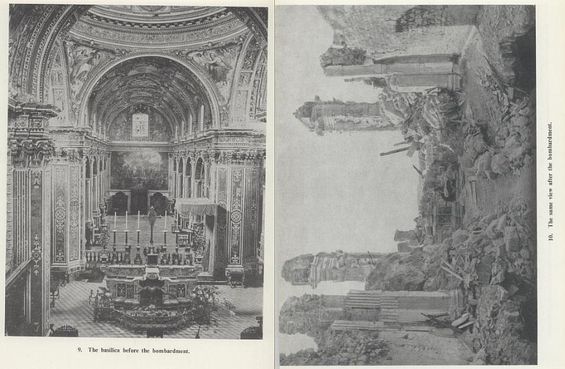 (L/R) The basilica within Monte Cassino Abbey before the Feb. 15, 1944 anti-Catholic assault, the same view [vertical on page] immediately after the 02/15/44 sacrilegious attack. - "The bombardment, which came in waves, was disastrous. A great many of the more than 800 refugees then in the monastery (after the first wave) ... in their instinctive desire to escape from the massive structure which was collapsing all around them and had already crushed dozens of people under its ruins, rushed out only to be struck down by Allied artillery. ... The Most Rev. Abbot of Monte Cassino, D. Martino Matronola, who was present at the bombardments of February 15-17 reported, 'There were no German soldiers in the monastery. The people seen fleeing in haste from the inside were refugees. Many of them were hit and died during the flight.' ... Some of the bodies were found in small rooms in which they had suffocated, such as an old man who had tried to protect a child with his body. A whole family had been buried in a tiny room; only the father, who was separated from the others when the first wave came, was found outside. He was reportedly hurrying to answer their cries for help when the second wave overcame him; once more he managed to rise, before he was finally felled. ... The bombardment constituted the largest concentrated high explosive destruction that anyone had ever seen. ... The Head Abbot Diamare in an interview stated (that after the bombing began), 'we laid out white cloths in order to say to them, do nothing to us, we are certainly without arms, we are no military objective, here is a holy place. It did not help, they have destroyed the monastery and killed hundreds of innocent people.'" (Excerpts from: "The Bombardment of Monte Cassino", by Herbert Block, 1976) - See our 07/19/13 posts & video on this subject. -ED