Article (below) from The Guardian, by Rory Carroll

" ... the rebel (Garibaldi), who in the 1850s had ... travelled through the US, was also a mason. The international masonic lodge successfully lobbied for him to be granted American citizenship."

"Perhaps no American president has been a greater friend of the Jewish people than Abraham." -Jewish World Review, 2010

" ...a great war is being waged against the Catholic Church."

Map of the popes Papal States - Stolen by

(Background from TCW: Giuseppe Garibaldi is one

of the worst enemies of the Catholic Faith in History):

With the outbreak of the Franco-Prussian War, Napoleon III withdrew his French garrison from Rome. With this garrison gone, the masonic Italian National Army (led by Garibaldi & Victor Emmanuel II, and fully supported by the Synagogue of Satan [the Jews]) was able to take the Papal State of Rome on September 20th, 1870, resulting in Pius IX becoming a "Prisoner of the Vatican" for the next eight years, until his death in 1878. 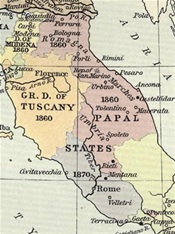 A frayed postcard in a Turin archive has revealed one of the most audacious gambles of the American civil war. Abraham Lincoln offered the command of the northern forces to Giuseppe Garibaldi, ... terror of the Pope.

The US president, his forces hammered by the Confederate army, turned in desperation to Garibaldi, spawning one of the great what ifs of history.

Rumours of Lincoln's *offer have circulated for a century and been denied by American scholars, but the document proved it was no myth, said Arrigo Petacco, a historian.

*Lincoln through the letter, dated July 17, 1861, from Secretary of State William H. Seward to H.S. Sanford, the U.S. Minister in Brussels, Garibaldi was offered a Major General’s commission in the U.S. Army.

He stumbled across the faded blue postcard, from Garibaldi to King Victor Emmanuel II telling the king of the offer, last week while rummaging in 90 boxes of material donated by Italy's exiled royal family.

According to Mr Petacco, the rebel, who in the 1850s had led an army in Uruguay and travelled through the US, was also a mason. The international masonic lodge successfully lobbied for him to be granted American citizenship.

Note: The reprobate Garibaldi was close to accepting the anti-Catholic Lincoln's 1862 offer, but did not. -ED

"Later they offered Garibaldi the command of one unit, rather than the whole army, but at that point it was too late and he had gone on to do other things," Mr Petacco said. "In Italy we always knew, but there was always a lot of scepticism in America. Now we know for sure." (End of article)