Letter Given by St. Louis IX on His Death-Bed to Son

Today - August 25th - is the Holy Feast of St. Louis IX, King of France. St. Louis is the patron of In Today's Catholic World, which began its mission to restore Throne (the French Monarchy) and Altar (the True Papacy) on *August 25th, 2005.

*"I entrust the future of this News Outlet (TCW), to the Catholic Monarch St. Louis, King of France, and humbly ask his powerful intercession for its success in possibly, hopefully, hastening the coming of the prophesied future Catholic Monarch who with the predicted future, lawful Great Pope, will usher in the Triumphal Reign of the Immaculate Heart of Mary". - The Editor/Owner of TCW, extracted from "TCW's Purpose" [Initial Press Release], August, 25th, 2005

In honor of this special day, we are providing readers with the following salutary words from this Glorious Saint and King: 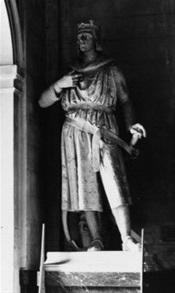 LETTER GIVEN BY ST. LOUIS ON HIS DEATH-BED TO PHILIP THE BOLD (HIS SON)

"Fair son, my first injunction to thee, is that thou set thy heart to love God, for without this no man can be saved. Avoid doing aught which is displeasing to God to wit deadly sin. Rather shouldst thou suffer all manner of humiliations and torments, than fall into deadly sin.

If God send thee adversity, receive it in patience, and give thanks to Our Lord, and think that thou hast deserved it, and that He will turn it all to good. If He give thee prosperity, thank heaven with humility; that through pride or otherwise thou mayest not be the worse for that which should make thee better. For one should not war against God with His own gifts.

Confess thyself often, and choose as confessor a worthy man, able to teach thee what thou shouldst do and what avoid; and bear and conduct thyself in such a fashion that thy confessor and thy friends may be bold to reprove thy faults.

Hear divine service devoutly, with thy heart and with thy lips, especially at the mass when the Sacrament is performed.

Let thy heart be gentle and compassionate towards the poor and mean and unhappy; and comfort and aid them in so far as thou art able.

Uphold the good customs of thy kingdom, and put down the bad. Be not covetous towards thy people, nor take upon thee to levy imposts and tallages.

If thou hast any trouble at heart, tell it forthwith to thy confessor, or to some tried and worthy man, who is not full of idle words; so shalt thou carry it more lightly.

Look that thou have in thy company good and true men, such as are not full of covetousness, be they men of religion or laymen, and talk often with them, and fly and shun the company of the wicked. Hearken gladly to the word of God, and treasure it in thy heart, and be zealous to procure prayers and pardons. Love thine own interest and good, and hate everything evil, wherever thou dost find it.

Let none be so bold in thy presence, as to speak any word that may induce or stir up sin, nor defame others by back-bitings. Neither suffer any lewd talk of God in thy presence. Give thanks to God often, for all the benefits He has done thee, so that thou mayest be ready to receive more.

Be faithful and strict to maintain law and justice, and true towards thy subjects, turning neither to right nor to left. Assist the right, and uphold the quarrel of the poor until the truth be made known. And if any man hath a suit against thee, do not prejudge it before knowing the truth; for thus shall thy councillors be more bold to judge according to truth, whether for or against thee.

If thou dost hold anything that is another's, either from thyself or from thy predecessors, if the fact is certain, give it back without delay; and if the fact is doubtful, let it be inquired into diligently by wise men.

Study how thy people and thy subjects may live in peace and in honesty under thee. Thy good towns likewise, and the customs of thy realm, preserve them in the same estate and in the same liberties in which they were maintained by thy predecessors. And if there be anything to amend, then amend and right it, and bind them to thee in favour and in love; for it is by the strength and wealth of the big towns that thou shalt awe and hold in check both friends and strangers, and particularly thy nobles and barons.

Honour and love all men of Holy Church, and see that the gifts and alms which thy forbears gave them be not taken from them nor diminished. It is told of a certain King, my grandfather Philip, that one of his councillors once said to him, that the men of Holy Church did him great wrong, by robbing him of his privileges and weakening his jurisdiction, and that it was very astonishing that he permitted it. The good King replied that he quite believed it; but that he considered all the mercies and loving kindness that God had shown him, and therefore preferred rather to waive some of his rights than to enter into dispute with Holy Church.

Honour and revere thy father and thy mother, and keep their commandment.

Bestow the benefices of Holy Church on persons of good and pure life, and according to the advice of true and honest men.

Beware of going to war with Christians save after great deliberation; but if thou must needs do so, then protect Holy Church and those who have no part in the quarrel. If wars and disputes arise among thy subjects, make peace between them as soon as thou canst.

Be diligent to have good provosts and good bailiffs, and frequently inquire into their behaviour, and into the behaviour of thy household, whether there be in them any vice, or over-great covetousness, or falsehood, or trickery.

Labour to banish all lewd sins from thy land; and specially put down, as far as in thee lies, all lewd oaths and heresy. Take care that the expenditure of thy household be moderate.

And finally, my very sweet son, I charge thee to have masses sung for my soul, and prayers said throughout my kingdom, and allot me a full and special share in all thy good works.

Fair and dear son, I give thee all the blessings that a good father may give his son; and may the blessed Trinity and all the Saints guard and preserve thee from all evil, and God give thee grace to do His will alway, so that He may be honoured through thee, and that thou and we after this mortal life may dwell together with Him, and praise Him without end. Amen."

Ecclesiastical Approbation
In Today's Catholic World (TCWBLOG.com) carries the approbation in writing of the Holy See in exile. It faithfully adheres to the rules for Catholic Journals mandated by Leo XIII in the Apostolic Constitution Officiorum ac Munerum, January 25, 1897 - so heavily re-stressed by Pius X in Pascendi Dominici Gregis, September 8, 1907.