Clement XIII Encyclical On Instruction in the Faith

" ... the teachers of the people should establish boundaries around them so that no word strays beyond that which is necessary or useful for salvation. The faithful should obey the apostolic advice not to know more than is necessary, but to know in moderation."

"On Instruction in the Faith" - In Dominico Agro

In the Lord's field, for the tending of which Divine Providence placed Us as overseer, there is nothing which demands as much vigilant care and unremitting labor in its cultivation than guarding the good seed of Catholic teaching which the Apostles received from Jesus Christ and handed on to Us. If in laziness this is neglected, the enemy of the human race will sow weeds while the workers sleep. Then weeds will be found which should be committed to the flames rather than good grain to store in the barns. However, St. Paul strongly encourages Us to protect the faith that the saints handed on to Us.(1) He told Timothy to preserve the sacred trust (2) because dangerous times were coming (3) when evil and deceitful men would exist in the Church of God.(4) The insidious tempters would use their work to try to infect unwary minds with errors which are hostile to evangelical truth.

It often happens that certain unworthy ideas come forth in the Church of God which, although they directly contradict each other, plot together to undermine the purity of the Catholic faith in some way. It is very difficult to cautiously balance our speech between both enemies in such a way that We seem to turn Our backs on none of them, but to shun and condemn both enemies of Christ equally. Meanwhile the matter is such that diabolical error, when it has artfully colored its lies, easily clothes itself in the likeness of truth while very brief additions or changes corrupt the meaning of expressions; and confession, which usually works salvation, sometimes, with a slight change, inches toward death. 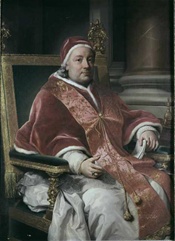 The faithful—especially those who are simple or uncultivated—should be kept away from dangerous and narrow paths upon which they can hardly set foot without faltering. The sheep should not be led to pasture through trackless places. Nor should peculiar ideas—even those of Catholic scholars—be proposed to them. Rather, only those ideas should be communicated which are definitely marked as Catholic truth by their universality, ambiguity, and harmony. Besides, since the crowd cannot go up to the mountain (5) upon which the glory of the Lord came down, and if whoever crosses the boundaries to see will die, the teachers of the people should establish boundaries around them so that no word strays beyond that which is necessary or useful for salvation. The faithful should obey the apostolic advice not to know more than is necessary, but to know in moderation.(6)

The popes clearly understood this. They devoted all their efforts not only to cut short with the sword of anathema the poisonous buds of growing error, but also to cut away certain developing ideas which either could prevent the Christian people unnecessarily from bearing a greater fruit of faith or could harm the minds of the faithful by their proximity to error. So the Council of Trent condemned those heresies which tried at that time to dim the light of the Church and which led Catholic truth into a clearer light as if the cloud of errors had been dispersed. As our predecessors understood that that holy meeting of the universal Church was so prudent in judgment and so moderate that it abstained from condemning ideas which authorities among Church scholars supported, they wanted another work prepared with the agreement of that holy council which would cover the entire teaching which the faithful should know and which would be far removed from any error. They printed and distributed this book under the title of The Roman Catechism. There are aspects of their action worthy of special praise. In it they compiled the teaching which is common to the whole Church and which is far removed from every danger of error, and they proposed to transmit it openly to the faithful in very eloquent words according to the precept of Christ the Lord who told the apostles to proclaim in the light what He had said in the dark and to proclaim from the rooftops what they heard in secret.(7) They have obeyed His bride, the Church, whose words are, "Show me where you recline at midday".(8) For where it is not midday and the light is not so bright that truth can be clearly known, error can easily be mistaken for truth because of its appearance of truth and can be distinguished from truth only with difficulty in the darkness. They knew that there were before and would again be people who attract those who seek food by the promise of more abundant pastures of wisdom and knowledge and that many people would come to those pastures because stolen waters are sweeter and hidden bread more delightful.(9) Therefore, in case the Church should be deceived and wander after the flocks of the companions who are themselves wanderers and unsettled with no certainty of truth, who are always learning (10) but never arriving at the knowledge of truth, they proposed that only what is necessary and very useful for salvation be clearly and plainly explained in the Roman Catechism and communicated to the faithful.

But even though this book, composed with remarkable work and effort, was universally approved and welcomed with the highest praises, at that time, the love of novelty almost wrested it from the priests' hands by inspiring the production of more and more catechisms which could compare in no way with the Roman Catechism. Thus two evils arose. Agreement on a method of teaching was almost destroyed, and the weak members of the faithful were scandalized at finding that they were no longer united by the same language and topics. On the other hand, contentions arose from different ways of transmitting Catholic truth and disunity of spirit and great disagreements from rivalry while one declared he was a follower of Apollo, another of Cephas, and another of Paul. We think that nothing can be more fatal to God's greater glory than the bitterness of those disagreements. Nothing can eliminate more disastrously the fruits which the faithful should gain from Christian discipline. Thus, in order to remove the double evil from the Church, We must return to that method from which some, setting themselves up in the Church as wiser, have insolently and imprudently led the faithful away for some time. We think that the Roman Catechism should be offered to the priests again so that just as it once strengthened the Catholic faith and strengthened the minds of the faithful in the Church's teaching which is the pillar of truth, (12) it may now turn them away from new ideas which neither antiquity nor unanimity recommend. To make the book more easily accessible and to correct the errors which have occurred in course of production, We have ensured that the copy published by Our predecessor St. Pius V in accordance with the decree of the Council of Trent is reprinted in Rome with all care. The vernacular translation of it which was made and published by order of the same St. Pius will be reprinted very soon by Our order and will finally be published.

So since Our care and diligence are providing a very suitable aid to remove the deceptions of wicked ideas at this very difficult time for the Church and to spread and establish true and sound teaching, it is your duty to see to it that the faithful accept it. Because the popes wanted this book set before pastors almost as the norm of Catholic faith and Christian discipline in order that unanimity might exist also in the method of transmitting doctrine, We now strongly recommend it to you, venerable brothers. We strongly encourage you to order that everybody who has the care of souls should use it in instructing the faithful in the Catholic truth in order to preserve unity of learning, charity, and harmony of spirits. For it is your duty to be attentive to everybody's serenity. Finally, it is the bishop's duty to watch carefully that nobody breaks the bond of unity and creates schisms by proudly acting in his own interests.

If those who ought to present and explain these books to the faithful are unsuitable teachers, they will prove useless or almost useless. Therefore, it is of the utmost importance that you choose for the office of communicating Christian teaching to the faithful not only men endowed with theological knowledge, but more importantly, men who manifest humility, enthusiasm for sanctifying souls, and charity. The totality of Christian practice does not consist in abundance of words nor in skill of debating nor in the search from praise and glory but in true and voluntary humility. There are those whom a greater wisdom raises up but also separates from the society of other people. The more they know, the more they dislike the virtue of harmony. Wisdom itself warns them with the word of God: "Have salt in yourselves and be at peace among us".(13) Thus it is necessary to have the salt of wisdom to preserve the love of neighbor and to offset weaknesses. If they turn from zeal for wisdom and from concern for their neighbor to disagreement, they have salt without peace—not a gift of virtue but a cause for condemnation. The more they know, the worse they fail. The Apostle James condemns them with these words: "If you are jealous and have contentions in your hearts, do not boast and be liars against the truth. This wisdom did not come down from on high. Rather, it is earthly, animal, diabolical. Inconstancy and every wicked deed accompany jealousy and contention. The wisdom which comes from on high is first of all pure. Then it is peaceful, modest, persuasive, agreeable to good things, full of mercy and good fruits. It does not judge and is without rivalry".(14)

Therefore, while We pray to God in affliction of spirit and in humility of heart to bestow his indulgence and mercy on our efforts to prevent disagreement disturbing the faithful, and to ensure that in the bond of peace and in charity of spirit, we all know, praise, and glorify the one God and our Lord Jesus Christ, We greet you with a holy kiss and We lovingly impart Our apostolic blessing to all of you and to all the faithful of your churches.

Given at Castel Gandolfo on the 14th day of June, 1761, the third year of Our Pontificate

*The Roman Catechism (Catechism of the Council of Trent)