"I have seen one of my successors, of the same name, who was fleeing (Rome) ... he will die a cruel death."

"I see the Russians at Genoa."

In 1909, during an audience for the general chapter of the Franciscan Order, Pope Pius X suddenly fell into a trance. The audience waited in reverent silence. When he awoke, the Pope cried out: 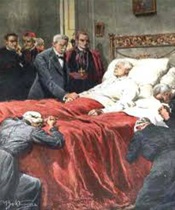 "What I see is terrifying! Will it be myself? Will it be my successor? What is certain is that the Pope will quit Rome, and in leaving the Vatican he will have to walk over the dead bodies of his priests.

"I have seen one of my successors, of the same name (Giuseppe), who was fleeing over the bodies of his brethren. He will take refuge in some hiding place; but after a brief respite he will die a cruel death."

[1.] "... Russians at Genoa." Reference to the Commie/masonic captors of Pope Gregory XVII - who guarded the hostage pope's every move in Genoa (Italy) - where His Holiness was exiled.

Today is the Feast of this 20th c. pontiff. See his remarkable prophecy above. Saint Pius X, Ora Pro Nobis!

On a previous reading of this prophecy, I had missed the significance of the connection that both Popes would have the SAME name! Yet more confirmation!