Throughout the Church's History, the Safety of the Lawful Successor of Peter now, as always, is of Essential Importance.Today, TCW is presenting a Declassified US State Department document about the papacy of Pius XI. This brings things into a clearer focus and better understanding of the real attention [duty] needed to protect and preserve the Heir to Peter's Chair.Starting with a few historical examples and quotes from the popes themselves, we can see how vital their safety remains.

Pius IX:As bombs were being thrown on the streets of Rome itself by the Church's enemies, Pius IX fled Rome in exile to the Castle of Gaeta, in Sicily in 1848. He lived there for two years before returning to Rome. With the outbreak of the Franco-Prussian War, Napoleon III withdrew his French garrison from Rome. This garrison being gone, the masonic Italian National Army (led by Garibaldi & Victor Emmanuel II - fully supported by the Synagogue of Satan) was able to take the Papal State of Rome on September 20th, 1870. The end, resulting in Pius IX becoming a "Prisoner of the Vatican" until his death in 1878. So angered were the Church's Revolutionary enemies (in Rome) at Pius IX, that in 1881 protesters almost succeeded in dumping his sacred corpse into the Tiber.Leo XIII: "It is not the tiara you are giving me, but death." - Leo XIII to the Cardinals who elected him.Pius X:Fearing the Italian Bolsheviks would steal the Vatican gold reserves and worse - contacted foreign diplomats stationed in Italy, to store the Vatican money. It is reported that he then considered going to Austria, in exile. Benedict XV:As his three predecessors, he was a "Prisoner of the Vatican" for his entire 8 year pontificacy.Pius XI:He remained most careful in his travels, even after signing the *Lateran Treaty on February 11, 1929 with Mussolini's Italy. 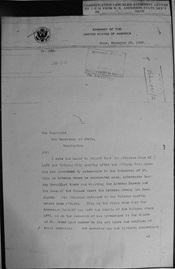 *The Treaty recognized the full sovereignty of the Holy See in the State of Vatican City.

This brings us to one of the 234 US State Departments declassified documents TCW has in its possesion, dated December, 20, 1929. This details the prudent caution the True Popes with their military guards had in their daily functions (as they have been surrounded by the Revolution):

Read the Secret Dispatch from the Embassy of the United States of America in Rome,

December 20, 1929 to the Secretary of State in Washington, which records the first time that the Sovereign Pontiff left the limits of the Vatican since 1870 (59 years)!

The Secretary of State,

I have the honor to report that His Holiness Pius XI left the Vatican City shortly after six o'clock this morning and proceeded by automobile to the Cathedral of St. John in Lateran where he celebrated mass, afterwards taking breakfast there and visiting the Lateran Museum and the room of the Palace where the Lateran Treaty had been signed.  His Holiness returned to the Vatican shortly before nine o'clock.  This is the first time that the Sovereign Pontiff has left the limits of the Vatican since 1870, as on the occasion of his appearance in the Square of St. Peter last summer he did not leave the confines of Papal territory.  The occasion was the fiftieth anniversary of his ordination which took place in that Cathedral.  The pupils of the Lombard Seminary served as his acolytes as they had done on the occasion of his first mass which was on December 21, 1879.

The visit of His Holiness was a complete surprise as he had previously informed but one person of his intention – the Rector of the Lombard Seminary.  He arranged last night for a celebration of mass in St. John in Lateran by Cardinal Pompili, Vicar General of Rome and Arch-Priest of the Cathedral.  At the same time he gave orders to his suite to meet him at six o'clock in the Vatican Chapel where he himself expected to conduct services.  This morning when the church officials had assembled at the Chapel, he informed them of his intention of issuing from the Vatican City and immediately carried this into effect.

As far as is known no previous notice was given to the Italian authorities.  No ceremonies of any kind accompanied his passage from and to the Vatican and at the time of his arrival at the Cathedral only the local church functionaries were gathered to receive him.  By the time that he left the Cathedral shortly after eight o'clock, a small crowd had gathered in the Square who saluted His Holiness and were in return blessed by him.

I have the honor to be, Sir,

TCW readers, the following highly relevant extract (below) is from the book *Cathedra Petri (Chair of Peter):

OR THE TITLES AND PREROGATIVES OF ST. PETER AND OF HIS SEE AND SUCCESSORS

AS DESCRIBED BY THE EARLY FATHERS ECCLESIASTICAL WRITERS, AND COUNCILS OF THE CHURCH." (LONDON BURNS AND OATES, 1881)

"Dean MILMAN acknowledges that "before the end of the third century, the lineal descent of her (Rome's) Bishops from St. Peter was unhesitatingly claimed and obsequiously admitted by the Christian world'" (Hist, of Early Christianity, vol. iii. p. 370, ed. 1840).

Protestant writers constantly refer to the silence of Pope Clement I. on this point when he is writing to the Corinthians, A.D. 98; but they overlook the very obvious fact, that during the age of persecutions the Popes must naturally have shrunk from loudly asserting their prerogatives, or putting themselves forward more prominently than they could help. Why should they have exposed themselves unnecessarily to the danger of immediate martyrdom, by proclaiming facts, sufficiently well known to all the faithful, in documents open to the inspection of all, and which would certainly be used as evidence against them by the heathen authorities? This consideration fully accounts for St. CLEMENT writing in the name of the Church of Rome, and keeping silence regarding his own prerogatives as its Bishop; for St. IGNATIUS-himself on his way to martyrdom in Rome-observing a like reticence in regard to the chief Pastor, when he writes to "the Church which there presides in the Covenant of Love;" and for St. IRENAEUS speaking, in terms which would not be too intelligible to the enemies of Christianity, of the "potentiorem principalitatem" which necessitated the communion of all other Churches with the Apostolic See.

TERTULLIAN, after his lapse into heresy, seems to break through this policy of reserve when (De Pudicitia, c. I) he declaims against "the peremptory edict put forth by the Chief Pontiff, the Bishop of Bishops" (the title of "PONTIFEX MAXIMUS," applied to a Christian Bishop, being especially calculated to give offence to the civil power); yet even he abstains from mentioning the Pope by name, or too directly, and so exciting the heathen authorities against him. He lets us know, however, that the Pope referred to (Zephyrinus) did claim and exercise supreme authority as St. Peter's successor, and that this authority was acknowledged by the Catholic Church-just as much as was the power of absolution or the authority of Bishops, which to the Montanists were equally objectionable (Ib. c. 21)."

So does this mean that Popes in the past were not always putting their names out publicly and they were in "hiding" like today?

Yes, it's always a question of holy prudence. Please see link on Pope (Saint) Caius who stayed Hidden in the catacombs for 8 Years to preserve himself for His flock, here: http://tinyurl.com/osanhco

Have you posted other US Declassified Documents on your website and where did get these?

Yes, see secret US Document posted on their Involvement with 1958 Conclave Coup: (CLICK http://tinyurl.com/oloq8w3). We personally obtained these at the U.S. National Archives in Washington D.C., which is open to the public.