Coming to the Rescue of The Pope in Exile (Our Duty!) 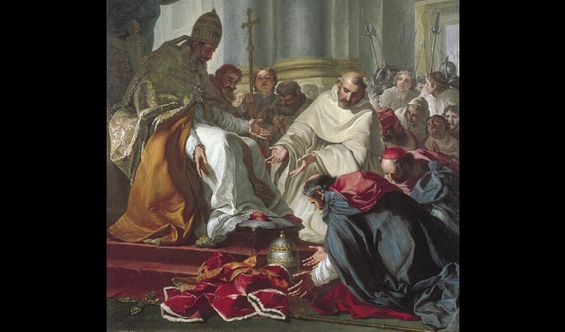 ("The Submission of the Antipope Victor IV to Pope Innocent II", Painting by French Artist Antoine Favray, 1743) There have been other popes-in-exile who would have never recovered possession of the Roman See, or perhaps never even been heard of, had it not been for sympathetic Catholic political powers coming to their rescue. The Catholic world might never have known about Pope Innocent II (1130-38), whose see had been usurped for eight years, first by the antipope Anacletus II (Peter Pierleone) and later by antipope Victor IV, Pierleone's successor, had not St. Bernard of Clairvaux convinced the Holy Roman Emperor Lotharius to send his troops to Rome and force the ouster of the false pope and restoration of the rightful Pope to the Chair of Peter. (In contrast, by 1958, all the Catholic Monarchs of any significance, had either been overthrown or assassinated by the forces of Freemasonry, and thus, there was not one Catholic political power left on earth available or able to defend the claims of the rightful pope, Gregory XVII, against the usurpation of the Vatican by agents of the lodge.)

So if a priest is ordained of the old rite, is he valid priest? If his Bishop was also ordained under old rite and so on?

He would be a validly ordained priest but would have to have jurisdiction (NOW) from lawful authority to administer Catholic Sacraments.

I'm afraid to ask but are all so called " Catholic" weddings after 1958 Invalid? or rendered less effective?

For a person baptized into the Catholic Church before Oct 26, 1958 who got "married" after that date, there is no marriage, unless they were KNOWINGLY in union with Pope Gregory XVII and His Hierarchy/Priests after 10/26/58.

".. the Council of Macon in a.d. 585 is found the first express DECLARATION of the Christian OBLIGATION of paying tithes, not indeed as a new law, but as the assertion of an admitted Christian principle." -Abbot Gasquet, "Parish Life in Medieval England".

Hi. Papal Restoration is the goal/duty of taking back the Papal Chair from the Freemasonic invaders who criminally usurped the Chair on Oct 28, 1958 from the True Pope, who was lawfully elected, "Siri" (Pope Gregory XVII).

Is that possible that real Catholic church is currently hidden? Where are they? Why traditionalists and sedevacantism are uncovered and not the real Church?

"To labor and to suffer for the one we love is the greatest proof of our love." -St. Anthony Mary Claret

So what are we doing? What is the plan? Where is the organization?