97th Anniversary of the Miracle of the Sun at Fatima 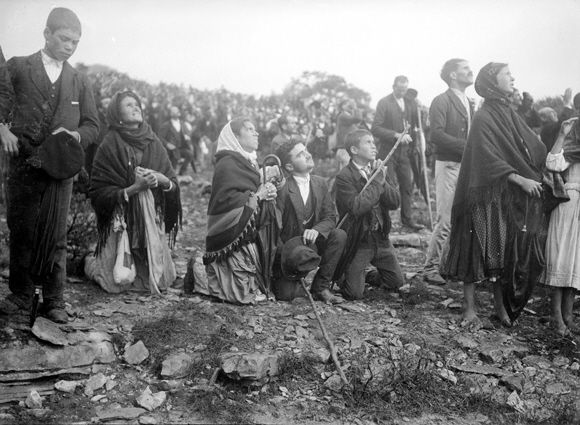 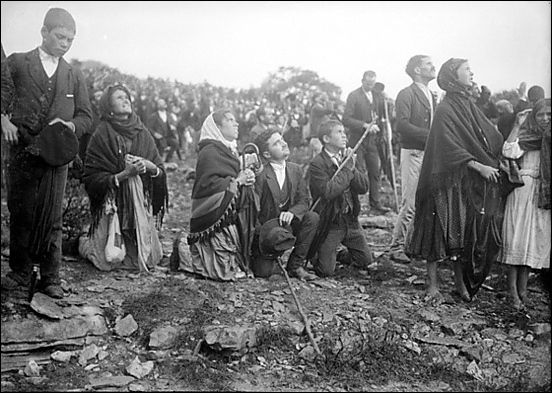 As early as May, 1917, Jacinta and Lucia had told people that the Lady they saw had promised a miracle on October 13, at the hour of noon, as a sign of their sincerity. They had repeated this at various times, and had never altered their story even under threats and persecution which must have been terrifying to such children at the ages of ten, nine, and seven. On the very day and hour they had foretold, some 70,000 persons testified that they had the unique experience of seeing the sun spin round and plunge towards earth.

The sun stood forth in the clear zenith like a great silver disk which, though bright as any sun they had ever seen, they could look straight at without blinking, and with a unique and delightful satisfaction. This lasted but a moment. While they gazed, the huge ball began to "dance" -- that was the word all the beholders applied to it. Now it was whirling rapidly like a gigantic fire-wheel. After doing this for some time, it stopped. Then it rotated again, with dizzy speed. Finally there appeared on the rim a border of crimson, which flung across the sky red streamers of flame, reflecting to the earth, to the trees and shrubs, to the upturned faces and the clothes all sorts of brilliant colors in succession: green, red, orange, blue, violet, the whole spectrum in fact. Madly gyrating in this manner three times, the fiery orb seemed to tremble, to shudder, and then to plunge precipitately, in a mighty zigzag, toward the crowd. A fearful cry broke from the lips of thousands of terrified persons as they fell upon their knees, thinking the end of the world had come.

Some said that the air became warmer at that instant; they would not have been surprised if everything about them had burst into flames, enveloping and consuming them. Some who had come to jeer fell on their faces and broke into sobs and abject prayers. This lasted about ten minutes - then all saw the sun begin to climb in the same zigzag manner, to where it had appeared before. It became tranquil, then dazzling. No one could look at it any longer. It was the sun of every day. The people stared at one another in joy and amazement. "Miracle! Miracle! The children were right! Our Lady made the miracle! Blessed be God! Blessed be Our Lady!"

The Message of Fatima Reveals Spiritual Basis for Crisis

Simple Guide On How To Pray The Family Rosary

Our Lady of Fatima's Message in: English, Italiano, Deutsch, Español

"Our enemies have on this been under no misapprehensions. From the outset, and with
the greatest clearness of vision, they determined on their objective; first to separate you
from Us and the Chair of Peter, and then to sow disorder among you." -Pope St Pius X

Detail on How the Freemasons "Stole" the Papacy from Pope Gregory XVII on Oct. 26, 1958(Extract from the scholarly book: L' Eglise Eclipsee)

Poison of Novel Lefebvre & Sedevacantist Churches Warned of 35 Years Ago

Fatima Message and the True Papacy (in Exile)

"There had been at the time of the deluge only one ark of Noah,prefiguring the one Church, which ark, having been finished to asingle cubit, had only one pilot and guide, i.e., Noah, and we readthat, outside of this ark, all that subsisted on the earth was destroyed...We declare, say, define and proclaim to every human creature thatthey by necessity for salvation are entirely subject to the Roman Pontiff."-Pope Boniface VIII, Unam Sanctam November 18, 1302

"... in the end my Immaculate Heart will triumph." -Our Lady of Fatima

Today is the 99th Anniversary of the Miracle of the Sun at Fatima, which occurred on October 13th, 1917. Blessed be the Immaculate Heart of Mary!

Today is the 98th Anniversary of the Miracle of the Sun at Fatima, Portugal. Pray for the conversation of Russia and the total Triumph of the Immaculate Heart ... the True Pope/Church in exile.