Women with Painted Faces not to Receive Holy Communion

"9. Maidens and women dressed immodestly are to be debarred from Holy Communion and from acting as sponsors at the Sacraments of Baptism and Confirmation... ." (Excerpt from Directive of Pope Pius XI, January 12, 1930 to the Sacred Congregation of the Council, on Christian Modesty)

Quotation from St. Charles Borromeo on the proper external observances we are to have when receiving Holy Communion wherein he says women are not to receive Holy Communion with painted faces: 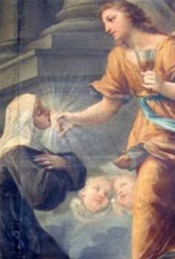 "The faithful should draw near to the body of the Lord with all reverence and humility, and so receive it. They should not have distractions of the eyes, not stare in the face of the priest; but they should look reverently at the consecrated Host, holding the Communion-cloth under the chin, the head raised moderately, the tongue resting on the under lip, not protruding the tongue, nor drawing it in till the priest has placed the Blessed Sacrament upon it. Then they should humbly bow the head, and not give way to audible sighing. The hands should be crossed on the breast, according to the ancient custom in the Church, or they may be joined together. Those who can afford it should appear in a mantle, but not in decorated bonnets trimmed with feathers. All warlike weapons should be laid aside, and the whole condition of the body should be humble, respectful, and cleanly. Women should not wear extravagant, showy clothing, nor have their hair fancifully dressed, nor have their faces painted (wear make up). They should not presume to come with half-clothed necks, or wearing transparent veils; they should so dress that all except their face be covered. All should receive the sacred Host on their knees, and not leaning clumsily on the altar-rail." (From, "The Means of Grace" by Fr. Richard Brennan, LL.D., Published by Benziger Brothers: New York, 1894 pp. 184-185. Imprimatur)

The following incident regards the conversion of the famous 19th century French actress *Eva Lavalliere (see her story below -ED). Here is the account of how she gave up cosmetics, which she realized are not pleasing to Our Lord.

"The habit of cosmetics persisted with Eva long after she surrendered her soul to grace. But one day, reading the 'Life of Blessed Angela of Foligno,' she came across the words of Jesus:

'For all your paint, your perfume and your coquettish treatment of your face, I have expiated. For them I suffered the buffets that distended and deformed my countenance and the spittle that poisoned my nostrils with its stench...'

That settled it! 'Light the fire,' she ordered her companion. And presently powder, lip-stick and rouge were in the flames, never to figure in Eva's life again. Thenceforth she could boast: 'Nothing touches my face but soap.'"(From "Handclasps with the Holy," Fr. Edward E. Murphy, S.S.J., "The Catholic Literary Guild", p. 245, 1941)

A True Catholic penitent (see her story below): 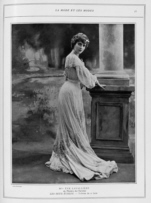 Not technically a convert, Eve Lavalliere (real name Eugénie-Marie-Pascaline-Fenoglio) was born into a violent family. Her alcoholic father eventually killed her mother and Eve herself escaped only narrowly.

Gaining an entry into the world of the Parisian stage, Eve became very rich and completely abandoned herself to a debauched life. Her conversion came about through the influence of a country priest.

"Her [Eve Lavalliere's] most ambitious dreams were now realities. She had fame and wealth and the power that comes with the possession of both. Managers of other theatres clamoured for her services. As a comedienne she was unique, for she had gaiety, freshness, vitality, and intense feeling, combined with a tenderness both appealing and naive. She never “acted,” she lived her parts, hence the perfect naturalness of her interpretations. Her admirers were not only those belonging to the theatrical world. Her reputation for wit and her gift of repartee made her popular with writers, politicians, and cultured people of all kinds. She was sought after by the greatest in the land; royalty asked to be introduced to her and she received them as equals and refused to be patronised. She had her full share of “temperament,” and many stories are told of her capriciousness. [...]

Her popularity increased rather than waned with the years. Her wealth was enormous, both from her theatrical earnings and from her friends and admirers: She had a sumptuous flat in the Champs Elysees, decorated and furnished in the latest fashion which included concealed lighting—then practically unknown, and a room furnished in polished ebony with purple hangings. Eve hated the room and privately thought it hideous; but it was good publicity so it had to remain. To get away from it, she took another flat in Auteuil and spent most of her time there. Her days were crowded now with social functions in addition to her work at the theatre, for she was always in request and no fete was complete without her.

Yet her disillusionment was increasing with every year. She had tasted all that the world could offer her: fame, wealth, excitement, admiration; all her dreams had come true. And she saw the emptiness, the hollowness of worldly success. “Even when I was at the height of my success,” she said years later, “I used to leave the stage victim to sadness I cannot describe.” And again: “A voice seemed to follow me everywhere saying: "Eve, you weren‟t made for this sort of thing,‟ and sometimes I despaired even to the point of wanting to commit suicide.” (Excerpts from, the 1936 Imprimatured "A Saint Of The Stage Eve Lavalliere" By Charlotte Kelly. CLICK to Read Full Text)

"Now that I know what it is to live I can't possibly go back to that existence.”

Some Quotations of Eve:

“All my being and all my will are turned toward this last end: to love God, Who loves me so much in spite of my past and present miseries.”

Towards the end of her life, Eve suffered a great deal from medical ill health (having long before given away all her wealth). The following exchange took place between Eve and a Parisian journalist:

"Do you suffer a lot?""Yes, horribly," she responded."Have you any hope of being cured?""None. But I am so happy! You cannot imagine how great my happiness is.""Even with so much suffering?""Yes, and because of it. I am in God’s hands. Tell my friends of days gone by that you met the happiest person on earth."

On her gravestone, she had the following words written:

“I left everything for God; He alone is enough.

O Thou Who didst create me, have pity on me.” 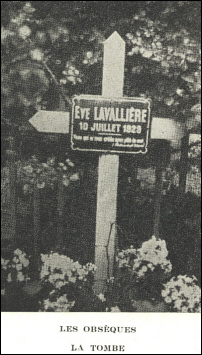 Eternal rest grant to them, O Lord, and let perpetual light shine upon them. Amen. May their souls and the souls of all the faithful departed, through the mercy of God, rest in peace. Amen.

"Sinners shall find in My Heart the source and the infinite ocean of mercy."(Promise #6 of the 12 Promises of The Sacred Heart to St. Margaret Mary Alacoque)

"Do Not be Discouraged"

"Blessed Angela of Foligno had many difficulties to encounter after her conversion. The worldly life she had formerly led had taken such deep roots that it required great efforts on her part to destroy them. Satan not only suggested to her that she would not persevere in her conversion, but that it was foolish for her to impose such an impossible task on herself, for which she would be blamed by every sensible person. In the midst of this battle and anguish of soul she at once had recourse to God, begging of Him to come to her assistance.

One day, whilst thus praying for help from God, she fell asleep and dreamed that she saw Our Lord, who said to her: "In this Heart all is truth and there is no shadow of an untruth in it." At first she did not understand the meaning of this, but later on Our Lord showed her how faithfully He keeps His promises of helping those who invoke Him. "Oh," said He to her, "what have I not suffered, especially for the sins of thy heart! It was in all things opposed to God s commands, filled with anger, envy, sensuality, a seething sea of sinful feelings and passions. This is why I allowed My Heart to be pierced. From this Heart comes that healing power which removes every evil from the human heart. Water flowed from it, to extinguish the flames of concupiscence, and blood streamed down to take away sorrow." Thus did Our Lord console her and prepare her for fresh encounters, and it was through her devotion to and trust in the Sacred Heart that she succeeded in gaining the victory and attaining to the highest degree of perfection." (End)

"To know oneself and to know God, that is the perfection of man; without this knowledge, visions and the greatest gifts are of no account." -Bl. Angela of Foligno

The Dress of Virgins by St. Cyprian

This is the first time I've heard of Eve Lavalliere, Catholic penitent, but I will begin to pray to her today.

If any true Catholics have prayed to the Catholic penitent Eve Lavalliere and received special answers (perhaps miracles) to prayers directed specifically to her - please email TCW - who will forward documented information to proper Church Authority.