By Father I. B. Pranaitis

(The following was extracted from "The Talmud Unmasked"):

What Christians have thought of the Talmud is amply proved by the many edicts and decrees issued about it, by which the supreme rulers in Church and State proscribed it many times and condemned this ... Secondary Law Code of the Jews to the flames. 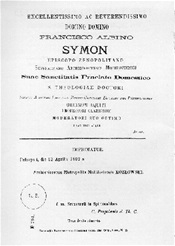 In 553 the Emperor Justinian forbade the spread of the Talmudic books throughout the Roman Empire.(15) In the 13th century "Popes Gregory IX and Innocent IV condemned the books of the Talmud as containing every kind of vileness and blasphemy against Christian truth, and ordered them to be burned because they spread many horrible heresies."(16)

Later, they were condemned by many other Roman Pontiffs—Julius III, Paul IV, Pius IV, Pius V, Gregory XIII, Clement VIII, Alexander VII, Benedict XIV, and by others who issued new editions of the Index of Forbidden Books according to the orders of the Fathers of the Council of Trent, and even in our own time.(17)

(17) In the latest edition of this Index Expurgatorius "by order of Our Holy Lord Pope Leo XIII now happily governing the Church of Christ," issued in 1887, "The Talmud and other Jewish books" are proscribed as follows: "Although in the Index issued by Pope Pius IV, the Jewish Talmud with all its glossaries, annotations, interpretations and expositions were prohibited; but if published without the name Talmud and without its vile calumnies against the Christian religion they could be tolerated; however Our Holy Lord Pope Clement VIII in his Constitution against impious writings and Jewish books, published in Rome in the year of Our Lord 1592 . . . proscribed and condemned them: it was not his intention thereby to permit or tolerate them even under the above conditions; for he expressly and specially stated and willed, that the impious Talmudic, Cabalistic and other nefarious books of the Jews be entirely condemned and that they must remain always condemned and prohibited, and that his Constitution about these books must be perpetually and inviolably observed."