The Love of God Shown in the Passion of Christ

Image of 19th c. French Holy Card (Translation): "I am the Good Shepherd. The Good Shepherd attracts everything to Him through the chains of his love."

THE LOVE OF GOD SHOWN IN THE PASSION OF CHRIST

God commendeth his charity towards us: because when as yet we were sinners, according to the time, Christ died for us. -Rom. v. 8, 9.

1. Christ died for the ungodly (ibid. 6) This is a great thing if we consider who it is that died, a great thing also if we consider on whose behalf he died. For scarce for a just man, will one die (ibid. 6), that is to say, that you will hardly find anyone who will die even to set free a man who is innocent, nay even it is said, The just perisheth, and no man layeth it to heart (Isaias Ivii).

Rightly therefore does St. Paul say scarce will one die. There might perhaps be found one, some one rare person who out of superabundance of courage would be so bold as to die for a good man. But this is rare, for the simple reason that so to act is the greatest of all things. Greater love than this no man hath, says Our Lord himself, that a man lay down his life for his friends (John xv. 13).

But the like of what Christ did himself, to die for evildoers and the wicked, has never been seen. Wherefore rightly do we ask in wonderment why Christ did it.

2. If in fact it be asked why Christ died for the wicked, the answer is that God in this way com- mendeth his charity towards us. He shows us in this way that He loves us with a love that knows no limits, for while we were as yet sinners Christ died for us.

The very death of Christ for us shows the love of God, for it was His son whom He gave to die that satisfaction might be made for us. God so loved the world, as to give His only begotten Son (John iii. 1 6). And thus as the love of God the Father for us is shown in his giving us His Holy Spirit, so also is it shown in this way, by his gift of his only Son.

The Apostle says God commendeth, signifying thereby that the love of God is a thing which cannot be measured. This is shown by the very fact of the matter, namely the fact that he gave His Son to die for us, and it is shown also by reason of the kind of people we are for whom He died. Christ was not stirred up to die for us by any merits of ours, when as yet we were sinners. God (who is rich in mercy) for his exceeding charity wherewith he loved us, even when we were dead in sins, hath quickened us together in Christ (Eph. ii. 4).

3. All these things are almost too much to be believed. A work is done in your days, which no man will believe when it shall be told (Habac. i. 5). This truth that Christ died for us is so hard a truth that scarcely can our intelligence take hold of it. Nay it is a truth that our intelligence could in no way discover, And St. Paul, preaching, makes echo to Habacuc, I work a work in your days, a work which you will not believe, if any man shall tell it to you (Acts xiii 14).

So great is God's love for us and his grace towards us, that he does more for us than we can believe or understand. 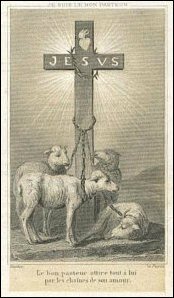