God the Father Delivered Christ to His Passion

GOD THE FATHER DELIVERED CHRIST TO HIS PASSION

God spared not even His own Son, but delivered Him up for us all. Rom. viii. 32.

Christ suffered willingly, moved by obedience to His Father. Wherefore, God the Father de- livered Christ to his Passion, and this in three ways:

1. Because the Father, of His eternal will, pre-ordained the Passion of Christ as the means whereby to free the human race. So it is said in Isaias, The Lord hath laid on Him the iniquity of us all (Isa. liii. 6), and again, The Lord was pleased to bruise him in infirmity (ibid. liii. 10).

2. Because He inspired Our Lord with the willingness to suffer for us, pouring into his soul the love which produced the will to suffer. Whence the prophet goes on to say, He was offered because it was his own will (Isa. liii. 7).

3. Because He did not protect Our Lord from the Passion, but exposed him to his persecutors. Whence we read in St. Matthew's Gospel, that as he hung on the cross Christ said, My God, my God, why hast thou forsaken me? (Matt, xxvii. 46). For God the Father, that is to say, had left him at the mercy of his torturers.

To hand over an innocent man to suffering and to death, against his will, compelling him to die as it were, would indeed be cruel and wicked. But it was not in this way that God the Father handed over Christ. He handed over Christ by inspiring Him with the will to suffer for us. By so doing the severity of God is made clear to us, that no sin is forgiven without punishment under- gone, which St. Paul again teaches when he says, God spared not his own Son.

At the same time God's goodheartedness is shown in the fact that whereas man could not, no matter what his punishment, sufficiently make satisfaction, God has given man someone who can make that satisfaction for him. Which is what St. Paul means by, He delivered him up for us all, and again when he says, God hath proposed Christ to be a propitiation, through faith in his blood (Rom. iii. 25).

The same activity in a good man and in a bad man is differently judged inasmuch as the root from which it proceeds is different. The Father, for example, delivered over Christ and Christ delivered himself, and this from love, and therefore They are praised. Judas delivered Him from love of gain, the Jews from hatred, Pilate from the worldly fear with which he feared Cesar, and these are rightly regarded with horror. 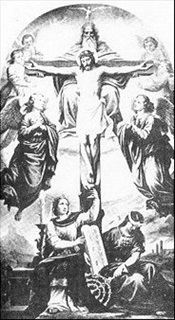