The Worth of the Life Which He Laid Down

He is the propitiation for our sins, and not for ours only but also for those oj the whole world. -1. John ii. 2.

Christ, however, by suffering out of love and out of obedience, offered to God something greater by far than the satisfaction called for by all the sins of all mankind, and this for three reasons. In the first place, there was the greatness of the love which moved him to suffer. Then there was the worth of the life which he laid down in satisfaction, the life of God and man. Finally, on account of the way in which his Passion involved every part of his being, and of the greatness of the suffering he undertook.

So it is that the Passion of Christ was not merely sufficient but superabundant as a satisfaction for men's sins. It would seem indeed to be the case that satisfaction should be made by the person who committed the offence. But head and mem- bers are as it were one mystical person, and there- fore the satisfaction made by Christ avails all the faithful as they are the members of Christ. One man can always make satisfaction for another, so long as the two are one in charity. 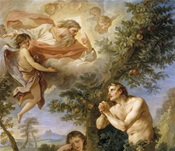 2. Although Christ, by his death, made sufficient satisfaction for original sin, it is not unfitting that the penal consequences of original sin should still remain even in those who are made sharers in Christ s redemption. This has been done fittingly and usefully, so that the penalties remain even though the guilt has been removed.

(i) It has been done so that there might be conformity between the faithful and Christ, as there is conformity between members and head. Just as Christ first of all suffered many pains and came in this way to his glory, so it is only right that his faithful should also first be subjected to sufferings and thence enter into immortality, themselves bearing as it were the livery of the Passion of Christ so as to enjoy a glory somewhat like to his.

(ii) A second reason is that if men coming to Christ were straightway freed from suffering and the necessity of death, only too many would come to him attracted rather by these temporal advan- tages than by spiritual things. And this would be altogether contrary to the intention of Christ, who came into this world that he might convert men from a love of temporal advantages and win them to spiritual things.

(iii) Finally, if those who came to Christ were straightway rendered immortal and impassible, this would in a kind of way compel men to receive the faith of Christ, and so the merit of believing would be lessened.