History of the Devotion to the Infant of Prague

Devotion to the Infant Jesus is as old as Christianity itself. It ever tends to keep the great mystery of Our Lord's birth vividly before us.

A special devotion to the Divine Child originated with the Carmelites in the City of Prague, Bohemia, in the beginning of the seventeenth century. Princes Polyxedia of Lobkowitz had received, as a wedding gift from her mother, a statue of the Divine Child, previously brought from Spain. After the death of her husband, the princes devoted herself to works of charity and was particularly helpful to the Carmelites in Prague. When in 1628 the Carmelite Monastery had been reduce to poverty, owing to the ravages of war, the princes gave her precious statue to the Carmelites, saying:

"I GIVE YOU WHAT I PRIZE MOST HIGHLY IN THE WORLD; HONOR AND RESPECT THE CHILD JESUS AND YOU SHALL NEVER BE IN WANT." 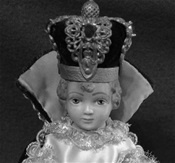 Her gift was placed in the Carmelite oratory. The words of the princess proved prophetic for as long as the Carmelites kept up their devotion to the Divine Infant of Prague everything prospered with them. The Carmelites were later forced to flee form the city and in the confusion of the war, they were unable to take with them their miraculous statue. The invaders siezed it, and threw it into a pile of rubbish. In 1635, peace came to Prague and the Carmelites returned. One of them, Father Cyril, who had previously received great spiritual help through his devotion to the Infant of Prague, sought the statue, and found it amidst the rubbish. Overjoyed, he placed the statue again in the oratory. As Father Cyril was one day praying devoutedly before the statue, he heard a voice saying:

"HAVE MERCY ON ME AND I WILL HAVE MERCY ON YOU. RETURN MY HANDS TO ME AND I SHALL GIVE YOU PEACE. THE MORE YOU HONOR ME, THE MORE I SHALL BLESS YOU."

Startled by these words, Father Cyril examined the statue and upon drawing aside the mantle covering it, he found that both hands of the statue were broken off. The hands were restored to the statue through the generosity of a client of the Divine Child. Once more, peace and prosperity returned to the Carmelites.

O Little Flower! daughter of France Intercede for us, that we endure the present adversity and receive it with patience, giving thanks to Our Lord.

I have prayed the novena to the Holy Infant of Prague many times over the years. It is a most powerful devotion.

The infant of Prague is a most powerful intercessor. Pray to him with confidence and with perseverance, and he will resolve all of your problems and bless all your endeavours!

The special devotion to the Divine Child under the title of "The Infant of Prague" helps to keep the great mystery of Our Lord's birth vividly before us.

"The more you honor Me, the more I shall bless you." (Revelation of the Infant of Prague to Fr. Cyril 1635 A.D. - and to all Catholics)

We just added a nice vintage statue of the Divine Infant of Prague to our family altar and immediately received blessings. We love Him!