French have a saying: "Whoever eats of the Pope dies."

THE CATHOLIC CHURCH IS INDESTRUCTIBLE AND INFALLIBLE

Indestructibility of the Church

The Catholic Church is indestructible; i.e., it will remain till the end of the world, for Christ said:

"The gates of hell shall not prevail against it" 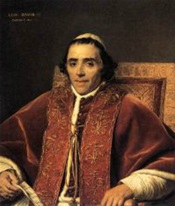 Hence there will always be Popes, bishops, and faithful, and God's revealed truths will ever be found in the Catholic Church. The archangel Gabriel had announced to Mary: "Of His kingdom there shall be no end" (Luke i. 33). "The Church," says St. Ambrose, "is like the moon; it may wane, but never be destroyed; it may be darkened, but it can never disappear." "The bark of the Church," says St. Anselm, "may be swept by the waves, but it can never sink because Christ is there."

1. Of all the persecutors of the Church none have succeeded

against it, and some have come to a fearful end.

Judas' end is the type of those of his imitators. Herod, the mur-

derer of the infants of Bethlehem, died in unspeakable tortures; so, too, Herod the murderer of St. James was devoured by worms. Pilate was banished by the emperor to Vienne, in France, and there he took his own life. During the siege of Jerusalem 1,000,000 Jews died of hunger or sickness, or in battle, the city itself was reduced to ashes and some hundred thousand Jews carried off into captivity. The tyrant Nero was deposed, and in his flight from Rome was stabbed by a slave. Diocletian came to a shameful end. Before his death his family were sent into exile, his statues were destroyed, and his body attacked with a loathsome disease. Julian the Apostate was struck down on the field of battle by a lance; his last words were: "Galilean, Thou hast conquered." The case of Napoleon is instructive. He kept Pius VII. a prisoner for five years, he himself was a prisoner for seven years; in the castle at Fontainebleau he forced the Pope to give up the States of the Church, promising a yearly income of 2,000,000 francs; in the same place he was himself forced to sign his abdication, and received a promise of a yearly income of the same amount. Four days after giving the order to unite the States of the Church with France he lost the battles of Aspern and Erlingen. He answered the excommunication launched against him, saying that the words of an old man would not make the arms drop from the hands of his soldiers. This actually happened in his Russian campaign from the intense cold; and on the same day on which Napoleon died at St. Helena, Pius VII. was celebrating his own feast day at Rome. No wonder the French have a saying: "Whoever eats of the Pope dies." The same fate is shared by the founders of heresies, and the enemies of religion. Arius burst asun- der during a triumphal procession; Voltaire died in despair. These facts and many more of the same kind illustrate the words of Holy Writ : "It is a fearful thing to fall into the hands of the living God" (Heb. x. 31).

(SOURCE: PP. 235-236, THE CATECHISM EXPLAINED (1899 A.D.), AN EXHAUSTIVE EXPOSITION OF THE CHRISTIAN RELIGION, WITH SPECIAL REFERENCE TO THE PRESENT STATE OF SOCIETY AND THE SPIRIT OF THE AGE:

A PRACTICAL MANUAL FOR THE USE OF THE PREACHER, THE CATECHIST, THE TEACHER, AND THE FAMILY.

FROM THE ORIGINAL, OF REV. FRANCIS SPIRAGO, Professor of Theology, EIGHTH EDITION.)