Great Book on Devotion to the Sacred Heart Posted!

TCW highly recommends to its readers the following excellent and encouraging book, "The Sacred Heart: Anecdotes and Examples to Assist in Promoting the Devotion to the Sacred Heart", by Fr. Joseph Keller, Imp., 1899. (Link for full text is below -ED) 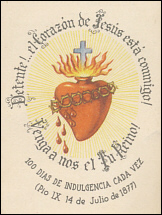 "It may be interesting to some of our readers to know how the Sacred Heart was honored by the Fathers of the Church in the first ages. I believe they confined their devotion to it to these three points. They saw in the Sacred Heart:

1. The origin of the Church.

2. The source of the sacraments.

3. They discovered in it a refuge in danger, temptation and salvation after the fall.

St. Augustine calls our attention to the fact

that it is not said in the Gospel 'that a soldier wounded the side of Jesus., but that he opened it,' in order that the gates of life may remain open for us, for there is the source of those sacra- ments, without which life cannot be given to us. That blood which was shed has flowed for the forgiveness of sin, and that water is at -the same time a bath and a beverage for us.

Then follows one of his most beautiful comparisons: 'Just in the same manner as there was an opening in the ark of Noe, through which all who entered were saved, so also should we go through the wounded side of Jesus into His Sacred Heart. In the same way as the first woman was formed from the side of the first Adam, and called life and mother of all the living, so also did the second Adam sleep in the sleep of death on the tree of the cross, in order to form a spouse, who came from the side of the Sleeper.'

The following lines are from Pope

Innocent VI: 'Among the many

mysteries of the Passion of Our Lord,

we ought especially to turn our eyes to the wound made by the spear in His sacred side after His death, whence flowed that blessed water and blood, which formed our virgin Mother, the Church, His spotless spouse.'

In another place he says: 'The spear which has wounded a dead Heart cured our wounds and has given us life.'"

*(Book is in a pdf file and may take time to download. -ED)