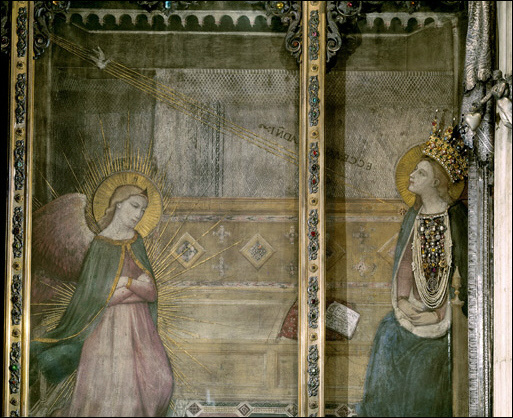 A 13th century Florentine monk named Friar Bartolomeo, began working on a painting of the Annunciation. However, the task was too great for Bartolomeo, who, upon realising that he was unable to create an image of the Virgin Mary which would justify her beauty, abandoned the painting. He fell into a troubled sleep, disturbed by the fact that he was incapable of creating an accurate depiction. Yet when he later woke up, he realized with the greatest of astonishment, that a supernatural hand had finished his painting of Our Lady's head/face! After this miracle occurred, people came from far and wide to visit, all wanting to see the miraculous painting. Pilgrims for centuries have come to Florence to venerate the Santissima Annunziata image, often leaving behind rich offerings in homage to the worthy Mother of God.

Dec 10, 2017: Commemoration of the Translation of the Holy House of Loretto [Regional Calendars of Spain, Belgium etc.]. Read about this Catholic miracle at: https://tinyurl.com/house-loretto