The following excerpt is from Christ's Vicar on Earth, Pope Urban II, preaching The Crusade against the infidel Muslims, at the sacred Council of Clermont, in 1095 A.D.:

"All who die by the way, whether by land or by sea, or in battle against the pagans, shall have immediate remission of sins. This I grant them through the power of God with which I am invested. O what a disgrace if such a despised and base race, which worships demons, should conquer a people which has the faith of omnipotent God and is made glorious with the name of Christ! With what reproaches will the Lord overwhelm us if you do not aid those who, with us, profess the *Christian religion!" 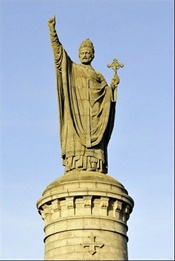 "He (the Great Catholic Monarch) shall destroy the Jewish and Mohammedan sects."

(Prophecy of St. Bridget of Sweden)