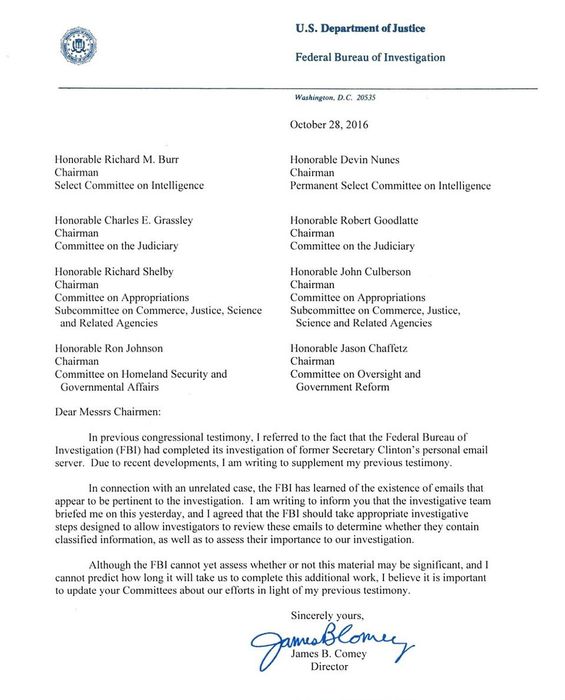 October 28, 2016: The FBI has learned of more emails involving Hillary Clinton’s private email server while she headed the State Department, FBI Director James Comey told several members of Congress, telling them he is reopening the investigation. The FBI Director said: “In connection with an unrelated case, the FBI has learned of the existence of email that appear to be pertinent” to Clinton’s investigation, Comey wrote to the chairs of several relevant congressional committees, adding that he was briefed about the messages on Thursday. --- UPDATED BREAKING INFO ON STORY, from The NY Times — WASHINGTON — (2:40 PM ET): "Federal law enforcement officials said Friday that the new emails uncovered in the closed investigation into Hillary Clinton’s use of a private email server were discovered after the F.B.I. seized electronic devices belonging to Huma Abedin, a top aide to Mrs. Clinton, and her husband, Anthony Weiner. The F.B.I. is investigating illicit text messages that Mr. Weiner sent to a 15-year-old girl in North Carolina. The bureau told Congress on Friday that it had uncovered new emails related to the Clinton case — one federal official said they numbered in the thousands."

Reported BY CNN: "Donna Brazile Out at CNN Amid Leaks to Clinton Campaign."