"Through Peter, Christ has given the keys of

the kingdom of heaven to the bishops." (St. Gregory of Nyssa)

1. There seems to be a number of people who acknowledge that Cardinal Siri was elected as pope, Gregory XVII.

2. That Gregory XVII was indeed put under grave duress by the Church's enemies, with the intent to block him in his functions as Christ's Vicar. (The Church describes this as sede impediti, that is, he was impeded by outside forces from publicly acting in His Office, which was still rightfully His de jure [by law].)3. However then this new intellectually dishonest group (sect?) it seems, holds, that at the death of Pius XII's worthy Successor, Gregory XVII, on May 2, 1989, that "Gregory XVII's Apostolic Succession" ceased. In his Summa Contra Gentiles, Lib. IV, cap. 76, Saint Thomas Aquinas teaches:“To conserve the Unity of the Church, the power of the keys must be passed on through Peter to the other pastors of the Church.”And the Sacred Council of Trent, session XXIII teaches:“Canon VI.--If anyone saith that in the Catholic Church there is not a hierarchy by Divine ordination instituted, consisting of bishops, priests and ministers; let him be anathema. Of course this hierarchy with canonical mission jurisdiction, solely from St. Peter's Successors (such as Pius IX, Pius X, Gregory XVII, etc.,) will last until the end of time.His Holiness, Pope Leo XIII in Satis Cognitum:“There is nothing to show that the Apostles received supreme power without Peter…Such power they certainly did not receive from Jesus Christ.”Yet, as stated above, this new brood/sect acts as if after Gregory XVII's death on (May 2, 1989), that the mission entrusted to Peter, which the gates of Hell will not prevail against, stopped! This gibberish is anathematized by Pius XI, here: Pope Pius XI wrote in Mortalium Animos: “It follows then that the Church of Christ not only exists to-day and always, but is also exactly the same as it was in the time of the Apostles, unless we were to say, which God forbid, either that Christ our Lord could not effect His purpose, or that He erred when He asserted that the gates of hell should never prevail against it.”These vile type typically promote some form of the damning no jurisdiction schismatic "latin mass" cult stuff. They also spend much of their time attacking us True Catholics in union with Gregory XVII's hierarchy today. Be on your guard and report them promptly (by clicking here).Exposition of Christian Doctrine, Patritius Joannes. 1898-1925172. Q. What sort of bishop would he be who did not hold spiritual powers from the Pope?        A. He would be an intruded or schismatical bishop.173. Q. What sort of pastor would he be who did not hold his powers from a lawful bishop?        A. He would be an intruded or schismatical pastor.Christian Apologetics, by Revs.W. Devivier, S. J. (and others) Imprimatur Patritius L. Ryan, 1924 “...a 'Christian' society whose bishops go back to the apostles only through the power of order, and not also through the power of jurisdiction (which solely comes from Peter), cannot claim to be apostolic, and consequently cannot be the Church of Christ.” 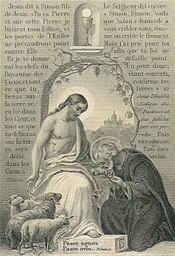 (Thou art Peter; and upon this rock I will build my Church)