On Importance of Devotion to St Michael the Archangel 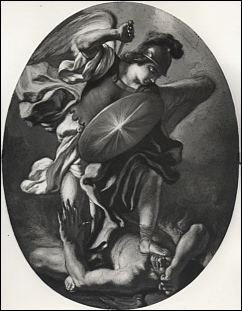 St. Michael the Archangel By Solimena Francesco c. 1720"On men depraved in mind and corrupt in heart the wicked dragon pours out like a most foul river, the poison of his villany, a spirit of lying, impiety and blasphemy; ... Her most crafty enemies have engulfed the Church, the Spouse of the Immaculate Lamb, with sorrows, they have drenched her with wormwood; on all her desirable things they have laid their wicked hands."

(From the Prayer To Saint Michael, The Archangel, Published by Order of His Holiness, Pope Leo XIII, May 18th 1890)

"It was St Michael who took up the defence of the honour of God against Lucifer, in the cause of the Incarnation of the Word; 1. and St John Chrysostom is of opinion, that he was also one of the first to pay his homage to Him in the crib of Bethlehem, on the day of His humble Birth. It is he who is the tutelary Archangel of the Church, and it is not without good reasons that he is believed to be the special guardian also of France. The signal aid which this kingdom has at times received from him is a strong proof of it. This great prince of Paradise has even chosen to have a place specially consecrated to him in this kingdom.. .

(1.) It is a common opinion among divines that, on the mystery of the Incarnation being revealed to the angels before the creation of man, the pride of Lucifer, highest of all the heavenly host, revolted at the thought that human nature should be preferred before the angelic, and refused to do homage to the Sacred Humanity which was to be hypostatically united with the Divinity in the Person of the Son of Mary. Contemplating his own perfections, and coveting the prerogatives of the Man-God, he said in his heart, "I will be like the Most High" (lea. xiv. 14): to which the glorious Archangel defiantly replied, "Mircka'tl — Who is like God?"Avranches, which at this day is popularly called Mont Saint-Michel, a place famous for the concourse of people who flock to it from all quarters, to honour this holy Archangel. It is he who assists souls at the dreadful hour of death, and who, according to the doctrine of St Augustine and St Bonaventura, not only assists them at that moment which decides their eternal lot, but also introduces them after death into Heaven. It is well here to remark, that he awaits the command of the august Mother of God to assist in a more especial manner those souls which she peculiarly favours: such is the opinion of St Bonaventura; and fitly, indeed, has the will of Heaven reserved this grace to the Queen of Heaven. Oh, how sweet it is to live and die under the protection of a patroness so loving and so worthy of love! It is St Michael, in fine, who is held to be the first of all the angels in glory, and the most exalted of the Seraphim. If, then, we love the interests of God only, we must love him; for he is the great saint of the cause of God, and of God Incarnate. If we love the Church, if we love ourselves, if we have any care for our salvation, if we desire to be succoured [helped] at the last moment of life, we must honour him greatly in all the necessities of the Church: for the destruction of schisms and heresies; for the establishment of ecclesiastical discipline in all its vigour; for holiness of life in its prelates, and specially in the Sovereign Pontiff; for the preservation and increase of the faith in those countries where it already exists; and for the promulgation of the gospel in heathen lands."

(Extracted from: "Devotion To The Nine Choirs Of Holy Angels, and especially to the Angel-Guardians",

Related Links: "The Chaplet of Saint Michael" (Prayer)Mont Saint-Michel To Be Meeting Place After "The 3 Days"

Learn more about St. Michael the Archangel at: tinyurl.com/st-michael-AP"If the Dragon see the flash of thy sword, he will not dare to come near us."