Happy Feast Day of Corpus Christi!In a book on St. Juliana of Cornillon, the holy nun who received a heavenly vision that eventually led to the institution of the Feast of Corpus Christi in honor of the Most Blessed Sacrament, the book pointed out that the Council of Trent specifically was pertaining to the Feast of Corpus Christi, when it declared the *following:CONCERNING THE MOST HOLY SACRAMENT OF THE EUCHARIST (Source: www.thecounciloftrent.com/ch13.htm)"Wherefore, there is no room left for doubt, that all the faithful of Christ may, according to the custom ever received in the Catholic Church, render in veneration the worship of latria, which is due to the true God, to this most holy sacrament. For not therefore is it the less to be adored on this account, that it was instituted by Christ, the Lord, in order to be received: for we believe that same God to be present therein, of whom the eternal Father, when introducing him into the world, says; And let all the angels of God adore him; whom the Magi falling down, adored; who, in fine, as the Scripture testifies, was adored by the apostles in Galilee.*The holy Synod declares, moreover, that very piously and religiously was this custom introduced into the Church, that this sublime and venerable sacrament be, with special veneration and solemnity, celebrated, every year, on a certain day, and that a festival; and that it be borne reverently and with honour in processions through the streets, and public places. For it is most just that there be certain appointed holy days, whereon all Christians may, with a special and unusual demonstration, testify that their minds are grateful and thankful to their common Lord and Redeemer for so ineffable and truly divine a benefit, whereby the victory and triumph of His death are represented. And so indeed did it behove victorious truth to celebrate a triumph over falsehood and heresy, that thus her adversaries, at the sight of so much splendour, and in the midst of so great joy of the universal Church, may either pine away weakened and broken; or, touched with shame and confounded, at length repent." 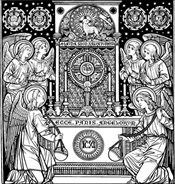 Please let me know when there will be a meeting in North America.

Please contact me about the next gathering of true Catholics. I dont care which state it is in I am going. JMJ

I am very interested in information regarding the upcoming North American meeting. With God's grace and if it is His will, hopefully I will be close enough to attend and receive the true sacraments for the first time in my life. Thank you.

Please contact me about the larger upcoming North America meeting. God bless and protect TCW for all you are doing for us, True Catholics.

The PRC will contact you within 24 hours about a larger North American meeting.

I am interested in any info re. upcoming meeting.

I would like to have more details. Thank you PRC for all you have done. Look forward to hearing back from you.

Plans are being made for a larger meeting of True Catholics to receive the Sacraments in North America. Contact info@papalrestoration.com for more information.