"The two brothers, Faustinus and Jovita were born of a noble family in Brescia. During the persecution under Trajan, they were led captives through various cities of Italy, in each of which they were made to endure most cruel sufferings, by reason of their brave confession of the Christian faith, which nothing could induce them to deny. At Brescia, they were for a long time confined in chains; then were exposed to wild beasts, and cast into fire, from neither of which tortures did they receive hurt or harm. From Brescia they were sent to Milan, still fettered with the same chains: and there their faith was put to the test of every torment that cruelty could devise; but, like gold that is tried by fire, their faith shone the brighter by these sufferings. After this, they were sent to Rome, where they received encouragement from Pope Evaristus; but there, also, were made to endure most cruel pains. At length, they were taken to Naples, and there, again, put to sundry tortures; after which, they were bound hand and foot, and cast into the sea; but were miraculously delivered by Angels. Many persons were converted to the true faith, by seeing their courage in suffering, and the miracles they wrought. Finally, they were led back to Brescia, at the commencement of the reign of the Emperor Adrian; there they were beheaded, and received the crown of a glorious martyrdom." (Extracted from Dom Guéranger's "The Liturgical Year – Septuagesima", Edition 1870. First posted on the Church Approved website aihmary.com.) 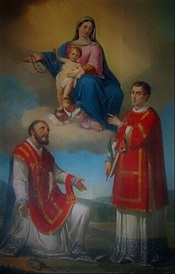