Feb 16: Our Lady of the Thorn near Chalon in Champagne 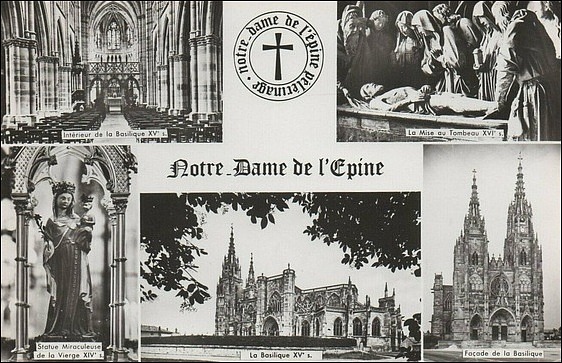 19th c. postcard of the miraculous statue of Our Lady of the Thorn [Notre-Dame de l'Épine] shown within the Basilica constructed in Her honor [still extant] - in the village of L'Épine, Marne (France) - where she appeared in 1419 A.D.

"The pilgrimage of Our Lady of the Thorn [Notre-Dame de l'Épine], near Chalons-sur-Marne, commenced in the first years of the fifteenth century. (Background): On the eve of the Feast of the Annunciation, a. d. 1419, two young shepherds leading their flocks by the side of a little chapel dedicated to St. John the Baptist, perceived a bright light in the midst of a thorny bush which grew near it. The first sheep of the flock being frightened by the light, took flight; but the young lambs approached the bush; the shepherds followed their example, and discovered a small statue of the Blessed Virgin, with the Infant Jesus in her arms. The miraculous light increasing when night came, people ran from all parts to see it, and as the place where the prodigy occurred was very high, the light could be seen for ten leagues around. The bishop of Chalons came in procession with all his chapter and many of the neighboring priests to visit the place. They found the bush as green as though it were summer; and they took the little statue of the Madonna and conveyed it to the neighboring chapel of St. John.