The Miraculous Voyage of St. Raymond of Penyafort 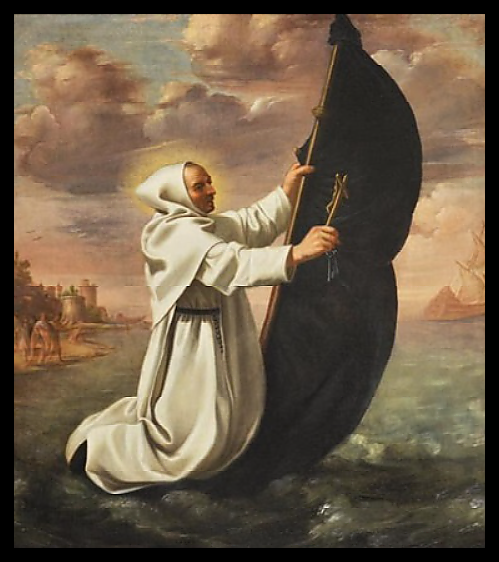 St. Raymond of Penyafort, served as the confessor for King James I of Aragon. Towards the end of the reign of James I, Raymond of Penyafort accompanied the king to the island of Majorcato, to initiate a campaign to help convert the Moors living there. Now, after he had disembarked, St. Raymond noticed that the king was entering into culpable relations with a lady of the court; as, in spite of his objurgations, James I did not make up his mind to break off the relationship with her. Finally, the saint told the king that he could remain with him no longer and made plans to leave for Barcelona. But the king forbade Raymond to leave the island, and threatened punishment to any ship captain who dared to take him. Saint Raymond then said to a Dominican brother who was with him, “Soon you will see how the King of Heaven will confound the wicked deeds of this earthly king and provide me with a ship!” They then went down to the seashore where Raymond took off his cappa (the long black cloak worn by Dominicans over the white tunic and scapular), and spread one end of it on the water while rigging the other end to his walking staff. Having thus formed a miniature mast, Raymond bid the other Dominican to come aboard, but his companion, lacking the saint’s faith, refused to do so. Then Raymond bid him farewell, and with the sign of the cross he pushed away from the shore and miraculously sailed away on his cloak. Skirting around the very ships that had forbidden him passage, the saint was seen by scores of sailors who shouted in astonishment and urged him on. Raymond sailed the 160 miles to Barcelona in the space of six hours, where his landing was witnessed by a crowd of amazed spectators. In awe of this miracle, King James I renounced his evil ways, made penance, and thereafter led a good life.