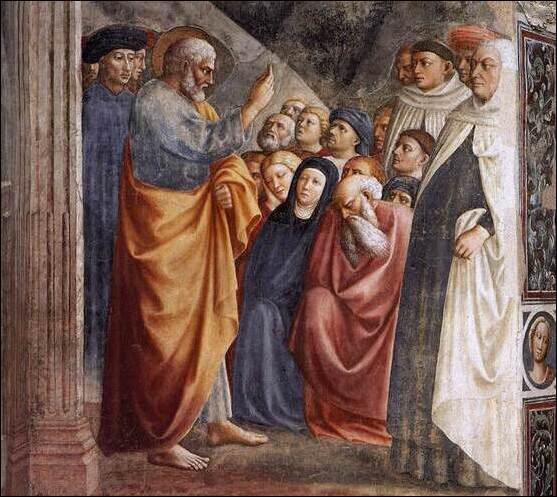 "St. Peter Preaching" (detail) by Masolino da Panicale 1426-27 A.D. The scene refers to St. Peter's [the First Pope] eloquent sermon, as recounted in the Act of the Apostles, which he gave in Jerusalem after the descent of the Holy Ghost on Pentecost. "Look at Peter. You easily recognise him by that majestic bearing, which, though sweetly tempered by deep humility, bespeaks his pre-eminent dignity. A few hours ago, it was the tranquil gravity of the Head of the Apostolic College; now, his whole face gleams with the flash of enthusiasm, for the Holy Ghost is now sovereign possessor of this Vicar of Christ, this Prince of the word, this master-teacher of truth." (Extracted from Dom Guéranger's, "The Liturgical Year - The Paschal Time", Vol. III, Dublin, Edition 1871)