NASA: Meteor that Exploded Over PA Like 30 Tons of TNT 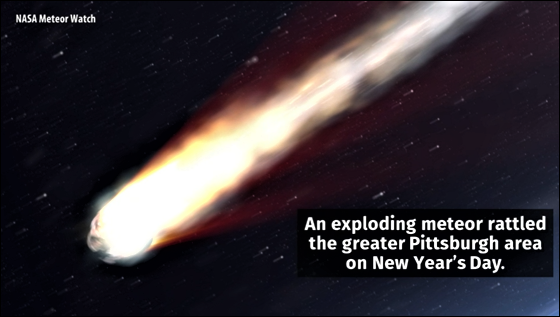 NASA reported that a meteor blew up over Pittsburgh on January 1, 2022 at approximately 11:30 a.m., and as the meteor fell apart its explosion was equivalent to 30 tons of TNT.  Data from a nearby infrasound station registered the blast wave from the meteor, enabling NASA to estimate the energy given off.

NASA says the meteor weighed half a ton when it came down and was assumed to be travelling at about 45,000 miles per hour when it made its loud entrance.

The shattering sound caused quite a frenzy among people in the Pittsburgh area, leading to a bunch of panicked 911 calls, reported CNN.

"Before the Comet comes, many nations, the good excepted, will be scoured with want and famine. ... The Comet by its tremendous pressure, will force much out of the ocean and flood many countries, causing much want and many plagues."