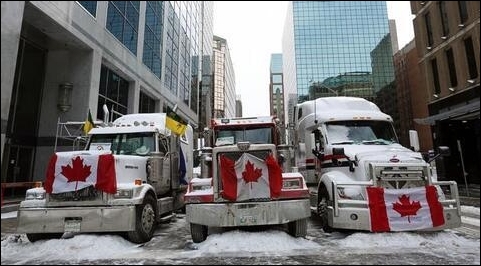 [Background: The protest movement was sparked by a vaccine mandate for truckers crossing the

US-Canada border, implemented by Prime Minister Justin Trudeau's Liberal government earlier this month. ... Upset with the new measure that would require unvaccinated Canadiantruckers crossing the two nations' boundary to quarantine once they've returned home, a loose coalition of truckers and groups began to organize the cross-country drive (to Ottawa) that began in western Canada.]

OTTAWA — All tow-truck companies on contract with the city have refused to haul away the big rigs that have gridlocked Ottawa's downtown for the second week in a row, the city's manager says.

The city has contracts with 10 companies, which are typically used to tow vehicles during parking bans so city plows can remove snow. [...]

"We've contacted them all and every one, they're all refusing as of today to provide heavy tow truck work," Kanellakos said Monday evening after a briefing to city council on the demonstration downtown. [...]