Feb 11: Feast of Our Lady of Lourdes (See Link to Book)

"In the fourth year after the definition of the dogma of the Immaculate Conception, the blessed Virgin vouchsafed to appear on several occasions  to a poor but pious and innocent child named Bernadette, in a rocky cavern overlooking the grotto of Massabielle on the banks of the Gave near the town of Lourdes in the diocese of Tarbes in France. She showed herself as a young and gracious figure, robed in white, with a white veil and blue girdle, and golden roses on her bare feet. At the first apparition on February 11, 1858, she taught the child to make the sign of the cross correctly and devoutly, and, taking a chaplet from her own arm, encouraged her by example to say her rosary. This was repeated at subsequent apparitions. On the second day... ." Read more here.

"The Apparition of Mary Immaculate at Lourdes to St. Bernadette:

A faithful narrative of the Apparitions of the Blessed Virgin Mary, at the rocks of Massabielle, near Lourdes, in the year 1858", by Father F.C. Husenbeth, D.D., V.G., and Provost of Northampton, Imp., 1870. 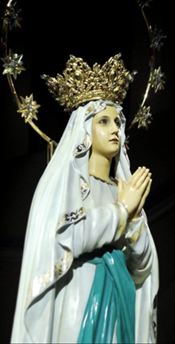