US Involved in 2014 Coup of Lawful Elected Ukraine Pres.

Image of perfidious D.C. (Neocon) Official, Victoria Nuland, a key architect in the overthrow of the democratically elected President of Ukraine, Viktor Yanukovych, in 2014.

Below are extracts from an insightful interview (from March 13, 2014) with veteran investigative journalist Robert Parry, on the US backed coup of the Ukrainian Government, in 2014:

PARRY: "... obviously (President Viktor) Yanukovych is an imperfect leader, and had many flaws. But that’s probably true of all the Ukrainian politicians, and, frankly, it’s probably true of all our politicians. But he was elected in 2010. He even agreed to move up the elections so the policy dispute that was at the center of this could be tested out. He was chosen by a majority of the Ukrainian people. Now, many of them come from the South and East, which are more Russian-oriented. And Kiev is based in the western part, which is more European-oriented. But still, the idea that a minority would be able to overthrow an elected leader doesn’t strike me as particularly democratic."

"Yet it became this issue where a group, a minority group in the streets, decided to get rid of their president. And that can be cheered on by some people, I suppose, but it’s not exactly an act of democracy for a minority to overthrow a democratically elected president." 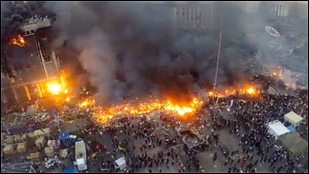 *Note: A leaked phone conversation of the senior U.S. diplomat Victoria Nuland and the US Ambassador to Ukraine, Geoffrey Pyatt surfaced online, that details some of the plotting of the US coup d'etat, of the lawful 2014 Ukrainian President [Yanukovych]. The U.S. Government did not dispute the phone call's authenticity.

"... how to avoid a worse conflict or a worse crisis [between the US & Russia] is what people really should be focused on, rather than trying to make hay out of being tough and swaggering, which is what we’re seeing in official Washington. ... So a lot is in play here. And I think the neoconservatives who have been trying to stir this up, including Victoria Nuland, who is a *holdover at the State Department from the Bush years, that the neocons want to achieve this idea of creating more pressure and more confrontation. They have achieved that. But I’m not sure it’s a good idea for the world or for the United States’ policies. ... "

(Robert Parry Interview given on 03/03/2014. Note: Perry was a well-known ivestigative journalist

who broke many of the 'Iran-Contra" stories for the Assocoated Press and Newsweek in the 1980s.) 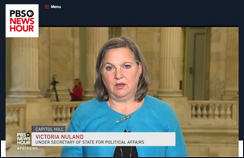 US Under Secretary of State Victoria Nuland acknowledged on March 8, 2022, that Ukraine has “biological research facilities.” [Biolabs] Speaking under oath in a Senate hearing, she said that US officials are “quite concerned” that Russian forces may seek to gain control of the labs, and were “working” with Kiev to prevent this from happening. [Note: the U.S. Department of Defense, according to public information it released, has been involved with Ukraine's biolabs for more than a decade... it seems likely in some sort of fashion, similiar to its "help" with Red China's Wuhan Lab. -TCW]

the free distribution of medical cannabis, free abortion in Ukraine, and the legalization of prostitution.

enemy of the Catholic Church (i.e., a schismatic - as a member of the "Orthodox" sect).

(3.) Russia signed a binding international agreement in 1994 committing "to respect

the independence and sovereignty and the existing borders of Ukraine"and “to refrain from the threat or use of force” against the country.

Ukraine, which previously disclosed the locations/details of these labs in a series ofPDF files online. (Note: we have that deleted website content [PDF's] archived. -TCW)

"I beseech thee to give to the whole world peace..."

Russian Ships off Ireland Coast are 'not welcome'

Why Frances is an Antipope & The True 1991 Consecration (of Russia to The I.H.M.)

*"God will use the Grand Monarch in order to exterminate all heretical sects,

all the superstitions, and to spread, in concert with the holy Pontiff, the

Catholic religion in all the universe, except in Palestine, land of malediction."

(Prophecies from Abbe Souffrant, The Cure of Maumusson, d. 1828, on the Great Catholic Monarch)

"U.S. Defense Dept. Says It Will Support Ukraine for ‘as Long as It Takes’ The agency said it was setting up a new command to oversee how the U.S. trains the Ukrainian military and announced another $400 million in aid." (NY Times)

Ukraine’s Financial Investigations Service, headed by Vadim Melnik, says it has uncovered numerous cases where humanitarian and even military aid provided by the West has been appropriated and sold at a profit inside the country.

"US announces $820M in Ukraine aid, including missile systems" (AP)

The so called "Bucha Massacre" may be a staged False Flag by certain Armed Ukrainian Forces. People need to be objective. We've researched this for hours now & there's a number of highly questionable aspects of this alleged reported attack on civilians.

According to Reuters [04/04/2022], the Pentagon said the US military does not have independent confirmation of reports of events in Bucha.

The NY Times was in Bucha on Sat. April 2, and didn't report a massacre. The Times said the Russians left “behind them dead soldiers and burned vehicles, according to witnesses, Ukrainian officials, satellite images and military analysts.”

Not simply trusting synchronized narratives is definitely a good instinct.

On 02/26/2022 a list of Ukrainian Biolabs was removed by the US Embassy in Ukraine, which previously disclosed the locations/details of these labs in a series of PDF files online. (Note: we have that deleted website content [PDF's] archived. -TCW)

Perennial swamp creature Victoria Nuland, Under Secretary of State for Political Affairs, acknowledged on March 8, 2022, that Ukraine has “biological research facilities.” [Biolabs] Note: The U.S. DOD has been involved with these labs since 2010.

A leaked phone call between EU foreign affairs chief, Catherine Ashton, and Estonian Foreign Minister Urmas Paet talked about the strong suspicion that people among Ukraine’s new leadership were behind the ‘Maidan snipers’.

The industrial military complex is frothing at the mouth.