"And when the saint with his people drew nigh unto the shore, he beheld a multitude of devils gathered together in the form of a globe, surrounding the whole island, and setting themselves against him even as a wall to defend their own citadel and to oppose his entrance. But his heart was not moved, nor did he tremble at the presence of these deformed ones, knowing that there were many with him more powerful than with them, even unto his triumph and their overthrow. Therefore stood he fixed in faith as Mount Sion, because mountains of angels were around him, and the Lord encompassed His servant great and mighty unto the battle. And the holy prelate, knowing that all those enemies were to be quelled by him through the virtue of the cross of Christ, raised his sacred right hand, and made the sign of the cross, and, telling unto his people what he beheld, and confirming them in the faith, unhurt and unterrified passed he over. Thus clothed with strength from on high, mightily did he exercise the armor of the power of God to the overturning of the powers of the air, who raised themselves against all height and against the wisdom of the Lord, being always ready to punish their disobedience and their rebellion... ." 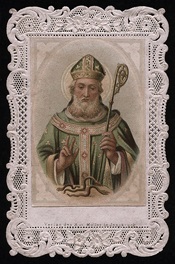 (Source: "The Most Ancient Lives of Saint Patrick: Including the Life by Jocelin, Hitherto Unpublished inAmerica, and His Extant Writings", Ch. 28, "How he beheld Devils", Edited by Fr. James O'Leary, D.D., 1880)