Subiaco, Cradle of the Order of St. Benedict 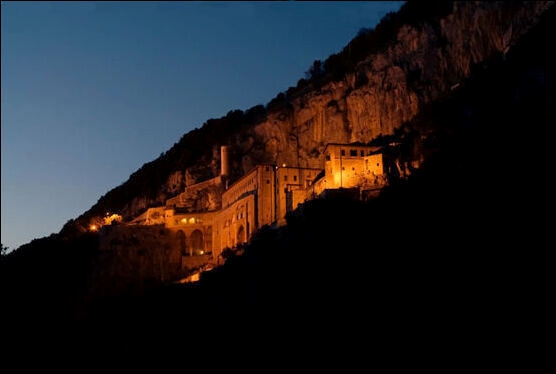 Subiaco: Sanctuary of the Holy Cave

Founded in the Sixth Century, the Benedictine Order had by the 14th Century no less than 37,000 monasteries and had contributed 24 Popes and 1500 Saints to the Church.

Set like a gem in the rock face of Mount Taleo near Subiaco, Italy, the Sanctuary of the Sacro Speco (“Holy Cave”) is one of the most important places in the history of the Order of Benedict - for here is enshrined the very cave in which the young Saint Benedict of Norcia lived in the early sixth century as a hermit, following the example of the Desert Fathers.

Through that period of solitude spent in this harsh and wild place, Saint Benedict was able to grow in holiness... discipline which would lead him in a few years’ time to found the first monastic communities along the Aniene river valley: the seed from which would develop the whole of Western monasticism.

The Holy Rule of St. Benedict