"Catechism of the Devotion to The Sacred Heart of Jesus"

(From The Preface): "The little treatise of which the present is a translation, was published in Dutch, at Bois-le-Duc, by Fr. R. Pierick, S. J. Fifteen thousand copies were bought up in a few months by the Catholics of Holland. ... The Catechism unites clearness and brevity with theological exactness.

May the present edition meet with the same favor as the preceding, and assist to spread and promote ever more and more the knowledge of, and the devotion to, the Sacred Heart of Jesus."

*This text was published by the Church approved, The Messenger of the Sacred Heart, a Catholic periodical; the print organ of The Apostleship of Prayer, a pious association founded in 19th Century France by the Jesuits. There were many editions in various languages, promoting devotion to the Sacred Heart of Jesus. In the late 1940s, The Messenger was banned in many Soviet Block countries. 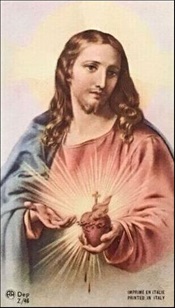 Sweet Heart of Jesus, be Thou my love. (300 days Indulgence)