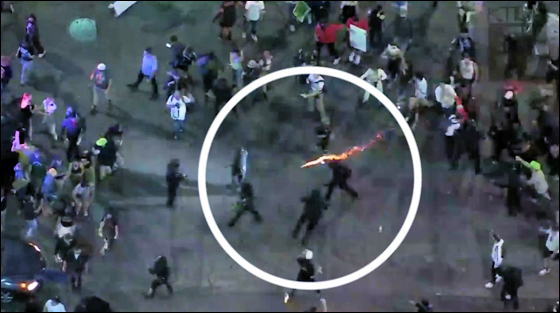 told protesters that 'right now, elections are not enough' to reclaim abortion "rights" in America

June 25, 2022, LOS ANGELES (KTLA News) — A man who allegedly attacked a police officer with a “makeshift flamethrower” during Friday night’s [pro-abortion] demonstration in downtown Los Angeles has been arrested and is facing *possible charges for attempted murder.

*Update 06/26/2022: Ortiz has now been formally charged for attempted murder of a (LAPD) police officer.

The Los Angeles Police Department said 30-year-old Michael Ortiz attacked an officer with a torch, sending the officer to the hospital with burn injuries.

He remains in custody as of Saturday night with bail set at $1 million... .

LAPD Chief Michel Moore (in a news release) said: “I condemn the violence against officers that occurred last night and into today. Individuals participating in such criminal activity are not exercising their *1st Amendment rights in protest of the Supreme Court decision, rather, they are acting as criminals.”

*The American, erroneous concept of "1st Amendment rights", is of course foreign to the mind of the Catholic Church. -ED