St. John Eudes Instructs on How to Deal with a Pandemic

(On Left) Illustration of St. John Eudes Assisting the Afflicted People of a Pandemic [The Plague] in 17th Century France

"When the plague began at Rouen, Father Eudes sent instructions to all the houses of his Congregation to humble themselves before God under the stroke of His Divine Hand. To this end, he says, we ought:

(1.) To adore His divine justice, acknowledging our sins for ourselves and in the name of all the people.

(2.) We should thank God, not only for consolations, but for afflictions. We should look on them, not only as a just punishment, but also as a sign of mercy, because God chastises, not to destroy, but to correct and save. 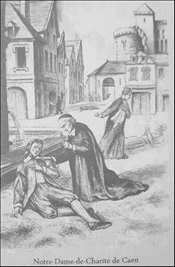 (3.) We should adore the Divine Will in all the designs it may have upon us, abandoning ourselves to it, that it may do with us whatever it likes.

(4.) We should adore our Lord Jesus Christ on His Cross, and the infinite love that made Him endure so many sufferings. We should offer ourselves to Him, to bear, for love of Him, all the sufferings He may be pleased to lay upon us, in thanksgiving for those which He bore for us.

(5.) We should present to Him all the afflicted, begging Him to give them grace to make a good use of their distress.

(6.) We should commend them to our Lady, as Comforter of the afflicted.

(7.) We should adore the immense charity with which our most loving Saviour took upon Himself the sins of the whole world, and offered Himself to His Father to make satisfaction for them. In union with this charity, we should offer ourselves as victims for His justice, for our own sins, and those of our brethren and sisters.

(8.) And, as Jesus Christ came down from heaven to serve and help the plague-stricken, that is, sinners, we should, in union with the same charity, offer ourselves, if it should so please Him, to assist those struck with the plague.

(9.) We should pray our Divine Mother, our Angel guardian, and our patron Saint, to do all these things for us.

Thus it was that this holy man profited by the public calamity to bless God, to help his neighbour, and to humble himself."

If only we had taken St. John Eudes guidance and not Dr. Fauci's. Think of all the businesses and lives that lockdowns ruined.

Dear TCW Staff,Once again your staff has found an absolute gem, a beautiful and sobering teaching of a tender hearted Catholic Saint, leading us to holiness.