Armed & Dangerous Man Tries to Run Over Police, On Loose 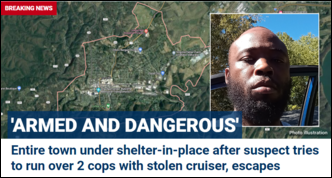 Breaking News: Residents of a Virginia town [Pulaski] were ordered to shelter in place on Thursday as police try to find an armed and dangerous man after he attempted to run over two police officers with a stolen police car.

Police say Jerrod Celablee Brown, 34, also stole additional firearms from the police vehicle and fled on foot after the crash.

Reporters at the scene said they heard gunshots which they believe are from Brown... .

Police have asked residents not to approach Brown as officers gather in the Southside of Pulaski to search for the fugitive.

Record-High 56% in US Perceive Local Crime Has Increased

Commie "Mayor" of Minneapolis on Looting & Arson in the City

Update: The suspect, Jerrod Brown, was arrested by local authorities - within 24 hours of the incident.