(RNS) October 3, 1969 — Joseph Cardinal Siri declared here that the Church has “absolutely no room for democracy” in its structure. The Archbishop of Genoa is considered to be one of the conservative leaders of the Roman Curia. He is a member of three Vatican congregations and the Commission for the Revision of Canon Law. Writing in Renovatio, a monthly journal, Cardinal Siri asked, “Is there room for democracy in the Church?” He answered his own question with an absolute “no." On the question of collegiality, Cardinal Siri said there are only two rules to be kept in mind. “First," he said, “the Pope can do everything and anything without the episcopal college and second, the episcopal college can do nothing without the agreement of the Pope.” 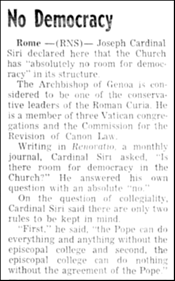 Satan's Strategy to Annihilate the True Happiness of Man

*(Note: "Learn about the Judeo-Masonic coup d'etat at the 1958 Conclave here -ED