TCW has heard certain SSPX "legends" like: Lefebvre never said the V2 sect's Novus Ordo "mass" ... that all the evidence of Liénart being a Freemason comes from one source; Marquis de La Franquerie (de facto, there are multiple sources, which list includes [in attempted damage controll] Lefebvre himself - The Marquis was an exemplerary Catholic who certainly fulfilled the requirements of a credible witness) ... that Lefebvre never signed the Second Vatican Council documents, etc., for years.

The following concerns the 100% FALSE claim, that "Archbishop" Marcel Lefebvre did not hand-sign (ALL) the V2 Council documents:

Note: Lefebvre himself publicly, sinfully lied more than once concerning the matter. One instance of his violating the 8th Commandment, is documented in a *1978 interview, that was later published by the SSPX's Angelus Press (Vol. V, No. 6, June 1982) titled, "Interview with Archbishop Marcel Lefebvre": 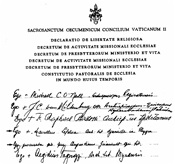 *Q. You have debated and taken part in the deliberations of the second council of the Vatican, have you not?

Q. Did you not sign and agree to the resolutions of this council?

Lefebvre: "No. First of all, I have not signed all the documents of Vatican II because of the last two acts. The first, concerned with "Religion and Freedom," I have not signed. The other one, that of “The Church in the Modern World”, I also have not signed. This latter is in my opinion the most oriented toward modernism and liberalism."

Q. Are you on record for not only not signing the documents but also on record to publicly oppose them?

Lefebvre: "Yes. In a book, which I have published in France, I accuse the council of error on these resolutions, and I have given all the documents by which I attack the position of the council - principally, the two resolutions concerning the issues of religion and freedom and 'The Church in the Modern World.'"

"Lefebvre's signature appears at the bottom of all the texts of the Council." -Doria

"...first time a photographer and journalist were allowed to photograph and describe."

Marcel Lefebvre did indeed sign every document of Vatican II—the same documents he would later harshly criticize, according to a recent article in the Italian magazine Panorama.

In an article entitled, "In the Secret Heart of the Vatican," by *Ignazio Ingrao, the author states that among the documents kept at the Vatican Secret Archives, "are those of the Second Vatican Council, which expose a blatant false history popularized by traditionalist Archbishop Marcel Lefebvre."

*Ignazio Ingrao (reporter for Panorama) was a key reporter that publicly broke the story this year of the three "Cardinals" that compiled a detailed report of the known sexual perverts in the (phony) Vatican itself - which contents many cite as the impetus for Antipope Ratzinger's flight. -TCW

"Lefebvre had in fact signed with his own hand the documents of Vatican II, beginning with the Constitution Gaudium et Spes which he then sharply criticized." Ingrao wrote in his article.

"The archive of the Second Vatican Council. In 2,154 folders is preserved throughout the history of the council:

the official one and the one that never appeared in the chronicles. Documents, minutes of the committees, confidential notes of John XXIII and Paul VI, the Cardinals minutes and reminders of the experts consulted

"Lefebvre's signature appears at the bottom of all the texts of the Council", said historian *Piero Doria of the Vatican Secret Archives, who helped Ingrao in the research.

*"At the present stage of the work, 1,465 envelopes have been inventoried out of a total of 2,153, for an overall number of more than 7,200 pages of inventory subdivided into 18 volumes, the 18th of which is still underway, but already runs to 408 pages." -Piero Doria, on the project of organizing the Second Vatican Council material in the Secret Archives.

Ingrao, explained that this was the first time a photographer and journalist were allowed to photograph and describe the vast area "where letters relative to the two thousand year history of the Church are conserved."

"For the first time a journalist and a photographer were allowed into the bunker. The security guards do not mess around: at the entrance you have to leave everything, bags, coat, cell phone. It is also forbidden to bring ballpoint pens, markers and pens, to avoid any risk of damaging the documents. Allowed? Only a pencil and notebook.

with your fingers. After passing a large door protected by cameras, you enter the heart of the archive. An elevator then takes you two floors underground, into bunkers." (Ignazio Ingrao, "Nel cuore segreto del Vaticano")

"In reality, historians and experts already knew that Lefebvre had signed the Council documents. But many people were not aware of this, and traditionalist propaganda (pseudo-traditionalists did this. -ED) spread the belief that Lefebvre had always opposed the documents. The original copies of the Vatican II documents show the contrary and for many this has come as a surprise."